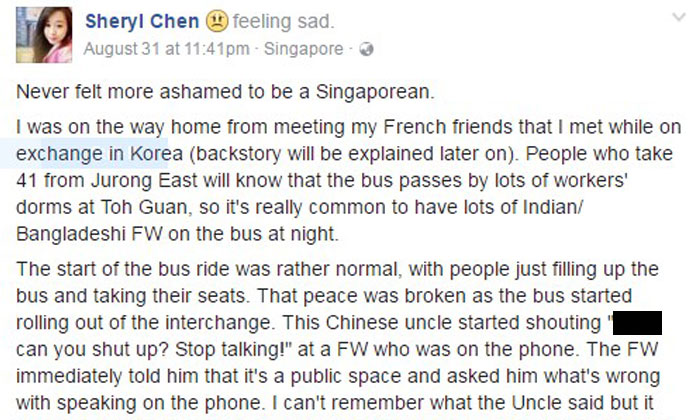 A woman's Facebook post has gone viral after she witnessed an unpleasant encounter with a man on the bus.

Sheryl Chan recounted her experience on bus service 41 when a Singaporean middle-aged man suddenly started shouting expletives at a foreign worker who was on his phone simply because he did not like the way he spoke.

It was a heated exchange but other passengers just kept quiet and looked on.

Feeling that something needed to be done, Sheryl decided to intervene and tried to tell the uncle to calm down but he continued to verbally abuse the foreign worker with Hokkien cuss words and told her not to "act smart".

She told the foreign worker to sit opposite her instead but that did not stop the uncle from his stream of abuse.

Before the man alighted the bus, he snidely told the foreign worker to "behave himself as a foreigner" which got the worker riled up to challenge the uncle to a fight.

Again, nobody else on the bus intervened so she shouted at the man to just get off the bus.

The foreign worker was so appreciative of what she did and another who witnessed the whole saga said "thank you sister for supporting us."

Many netizens have applauded her for her kind deed and for choosing to stand up for others.

To read her posting in full, click through the gallery above.

Related Stories
'Stop asking me if I am Singaporean': Indian-Singaporean pens column about racism
Property agent scolds client for being 2 minutes late -- but mistakenly sends messages to her
More About:
Bus
inappropriate
rude
racist
kudos
heartwarming
inspiring
get inspired
kind-hearted