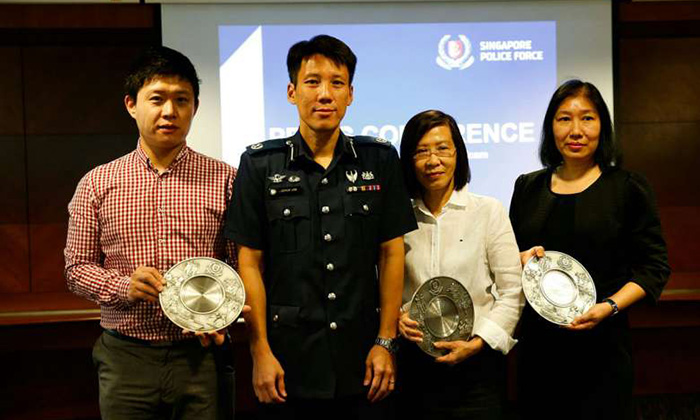 The elderly woman looked nervous as she entered the shop at People's Park Complex.

Accompanied by a younger woman, she said she needed to remit $180,000 to a beneficiary in China.

Mr Li Shu, 36, one of the remittance tellers, felt something was amiss.

His hunch was right: The elderly woman was a victim of a parcel scam.

The younger woman, a suspect, had accompanied her to the shop to remit the money.

But thanks to Mr Li and his colleagues, the money never went through.

For foiling the scam attempt and bringing it to the attention of the police, Mr Li, a fellow remittance teller, Ms Han Gui Yuan, 46, and the director of the remittance agency, who wished to be known only as Ms K.E. Thng, won a commendation from the police yesterday.

Recalling the incident on June 24, Mr Li said he became suspicious when he heard the large sum of money the women wanted.

He told The New Paper: "Auntie (the 80-year-old victim) didn't dare to speak when I asked her questions. She was nervous."

"(The younger) woman's actions were not normal. She kept hurrying me to make the transaction," he said.

He probed them with questions about the transaction.

The younger woman claimed that they were remitting money to purchase expensive Chinese medicinal herbs.

"(The suspect) kept asking me when the money would arrive. Because I thought the (amount) was odd, I purposely said that it would arrive only the following week to see her reaction," he said.

The two women then left after being told that the transaction would be delayed.

Mr Li discussed the incident with his more experienced colleague, Ms Han and decided to report the matter to the company's Head of Retail Operations.

The matter was brought to the attention of their director, Ms Thng, who tried to contact the elderly woman for more information.

She was surprised when her call was answered by the younger woman instead.

Ms Thng said: "(The suspect) asked me why I was asking her so many questions.

"She claimed to have transferred money before and that there are many other remittance companies she could patronise if we declined.

"I felt the case was very suspicious so I withheld the funds."

Ms Thng decided to alert the police, who arrived and tried in vain to contact the victim.

They eventually sent her a text message.

A police spokesman told TNP that the elderly victim, a retired piano teacher, was traumatised by the scam and was wary of answering her phone.

Fortunately, the victim's brother, who lives with her, saw the message on her phone.

He took his sister to the remittance company the next day.

Police investigations later revealed that the victim had received a phone call claiming that she had an illegal parcel overseas.

She was threatened with imprisonment if she did not cooperate.

She was accompanied by the 65-year-old female suspect to withdraw money from the bank, before proceeding to remit the funds.

This is not the first scam case the company has dealt with.

In the past, victims have been told by scammers that they have won lotteries or lucky draws, and were tricked into parting with their money to pay "administration fees" to secure their cash prizes.

Deputy Assistant Commisioner (DAC) Arthur Law, 46, who presented the commendation plaques, warned the public to be cautious of such scams.

"We hope to work closely with various stakeholders like banks and remittance companies. If they come across victims, they should inform the police," DAC Law said.