After postponing N-Levels for chemo, bone cancer survivor now aims to inspire others 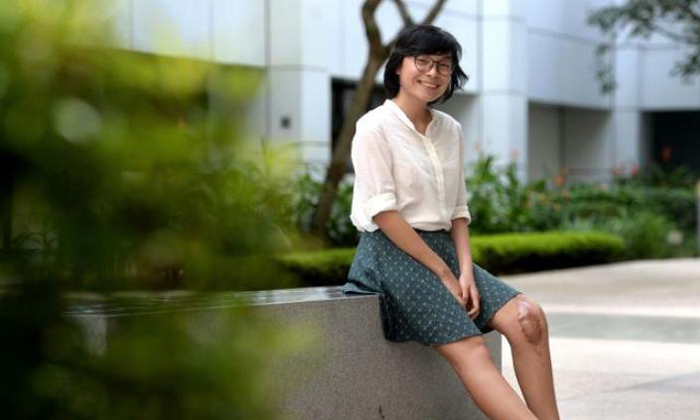 For Chong Hui Min, 17, collecting her N-level results today is a sign of how far she has come.

Diagnosed with bone cancer last year, she put her N levels on hold then, enduring six cycles of chemotherapy and an operation to replace her affected left knee with a metal implant.

This year, with her cancer in remission, she repeated Sec 4 in Junyuan Secondary School.

Her brush with cancer has made her determined to achieve her dream of becoming a doctor.

Said Hui Min: "I know with the knowledge I have, I can save lives."

In fact, even when she was undergoing chemotherapy in July last year, she pushed herself to attend the Parkway East Medical High School programme, which gives students hands-on experience in a hospital setting over three Saturdays.

Before her cancer was diagnosed, she was in the Girls' Brigade. Every day, she would walk the 2km distance between her home and school in Tampines.

One day at the end of 2014, a near-fall made her aware of a lingering pain in her left knee. Over half a year, she saw six doctors, who told her it was probably an inflammation or a ligament tear and prescribed painkillers, which were but a temporary relief.

"The pain was so alarming that I would wake up in the middle of the night because of it," she said.

She finally saw a specialist in April last year who did a magnetic resonance imaging test and diagnosed Hui Min with osteosarcoma, a type of bone cancer.

While the Singapore cancer registry does not keep a log of osteosarcoma cases, Adjunct Associate Professor Richard Quek, deputy head and senior consultant at the division of medical oncology at National Cancer Centre Singapore (NCCS)- who treated Hui Min- estimates there are 10 to 15 new cases a year among Singaporeans and Singapore residents.

Hui Min's first reaction was of disbelief. "I was thinking, are you sure? How could I have cancer when I am, like, 15?"

She initially hoped to sit the N levels last year with the rest of her cohort but later accepted that the treatment took too much of a toll on her.

In August last year, just three days before her 16th birthday, she underwent an operation to remove the cancerous bone and replace it with a 34cm metal implant.

"It was really, really painful. It felt like my leg got langgar by a lorry," she said of the post-operative pain, using the Malay term for getting hit by a vehicle. Months of physiotherapy followed, where she learnt to walk again.

She was among 23 recipients of this year's SingHealth Inspirational Patient award. Next year, she will support Relay For Life, a fundraising event by the Singapore Cancer Society(see box).

She has been trying to get back to her routine, albeit with changes. She takes the bus rather than walk to school and carries a lighter bag to reduce the strain on her leg.

She has to compensate for a shorter attention span, occasional hearing loss and difficulty making out similar-sounding words- a possible side effect of chemotherapy.

She goes for regular check-ups every four months. She said: "Every time when I do scans and they tell me I am cleared, I just earned another four months."