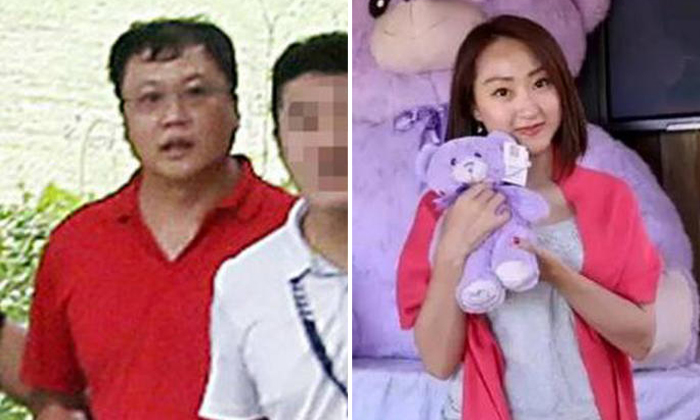 Laundry shop manager Leslie Khoo Kwee Hock, 51, who strangled his China lover in his car in a quiet road near Gardens by the Bay and then burned her body, was found guilty of murder on Thursday (July 18).

Judicial Commissioner Audrey Lim convicted Khoo of murdering engineer Cui Yajie, 31, on the morning of July 12, 2016, and rejected all defences he had raised to the charge.

She found that Khoo knew that pressing Ms Cui's neck with great force would "likely cause her death", and dismissed his claims that he did not have any intention of strangling her and only realised his hands were around her neck after she had stopped moving.

She also rejected Khoo's testimony that Ms Cui had physically abused him, and pointed to the victim's smaller size in dismissing his claim that Ms Cui had restrained him when he tried to get out of the car.

"The accused acted in a cruel and unusual manner," said the judge, as Khoo listened calmly to the verdict.

The judge also discredited Khoo's claim that he had burned Ms Cui's body to let her "rest in peace".

She said Khoo had reason to kill Ms Cui, who was pressing him to repay a $20,000 debt to her, to avoid financial pressure and the threat of ruin that she posed.

Sentencing was adjourned to a later date. Khoo faces the death sentence or life imprisonment.

Khoo did not dispute that he had strangled Ms Cui in his BMW and later burned her body in Lim Chu Kang Lane 8 over several days until nothing was left except clumps of hair, pieces of partly burnt fabric and a bra hook.

But his defence argued that he should be found guilty only of culpable homicide not amounting to murder.

Khoo's lawyer, Mr Mervyn Cheong, said the fight in the car was sudden and Khoo had been provoked by Ms Cui's verbal taunts. The defence claimed Khoo was suffering from a mental condition known as intermittent explosive disorder (IED).

The prosecution, led by Deputy Attorney-General Hri Kumar Nair, contended that Khoo was bent on silencing Ms Cui after she had threatened to expose him to his employer.

Khoo, who is married with a son, worked as a retail outlet manager for a laundry company, while Ms Cui, a Chinese national, was a senior engineer with a semiconductor company.

They met in early 2015 when Khoo helped her out of a sticky situation with her former boyfriend.

They began a relationship in which Khoo told her untruths, like the laundry company was his family's business and that he was single. When her suspicions were later roused, he told her he was divorced.

He also persuaded her to invest $20,000 in gold, a sum of money she had borrowed from her parents to give him.

The lovers had frequent quarrels over Khoo spending too much time with his "ex-wife" and son and over Ms Cui's money, which he had secretly used for another purpose.

In July 2016, Khoo asked a former lover to remit $10,000 to a bank account belonging to Ms Cui's father, but when Ms Cui realised she had got only half her money back, they had a heated quarrel.

Meanwhile, Khoo's wife confronted him about cheating on her, after Ms Cui sent her a Facebook message to stay away from him.

In the early hours of July 12, 2016, he picked Ms Cui up from Joo Koon MRT station in his car, purportedly to meet his supervisor.

But instead, he drove her to a secluded location near Gardens by the Bay and strangled her in the front passenger seat.

According to Khoo, after she stopped moving, he lowered the seat and covered her body with laundry bags to hide it from view. He then parked his car overnight at his condo.

Khoo steadfastly denied he had been in a romantic relationship with Ms Cui, even though he admitted he had affairs with many women, some of whom testified during the trial in March this year.