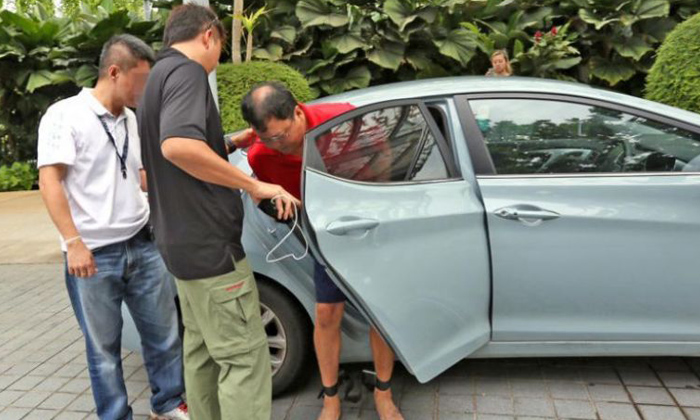 A screenshot taken from surveillance footage showing a black BMW parked outside a Sembawang minimart on the night that a 31-year-old woman was strangled was presented in court on Friday (March 22).

The colour of the car and part of the licence plate that was visible matched the BMW driven by murder accused Leslie Khoo Kwee Hock.

Asked if the vehicle was his car, Khoo, 50, walked across the courtroom - his feet in shackles - for a closer look before replying: "Not sure."

The prosecution is seeking to establish that Khoo had first bought charcoal from the minimart at Canberra Lane on the night of July 12, 2016, after killing engineer Cui Yajie that morning.

This would strengthen its case that he had already thought of burning the body of the Chinese national on the very day that he killed her in his car.

However, according to Khoo's court testimony earlier this week, he was so confused after killing Ms Cui that he drove around aimlessly for hours, and that the idea of burning her body came only on the afternoon of July 13.

The surveillance footage shows a man carrying bags to a BMW at about 8pm on July 12.

The car's licence plate starts with "SKU 5" - the same as that of Khoo's BMW - but the rest cannot be clearly made out.

While Khoo has admitted buying charcoal from the minimart, he said in court he could not remember which day he did so.

On Friday, Deputy Attorney-General Hri Kumar Nair noted that Khoo had mentioned the minimart when he was giving the sequence of events on July 12 to an investigator.

But Khoo said he was only responding when asked where he had bought the charcoal, and that the investigator "put two and two together".

The senior counsel also highlighted that in a police statement, Khoo said he bought a "second round"of charcoal from the store on July 14.

Mr Nair said Khoo was departing from his statement to give the impression that he was very confused after killing Ms Cui. Khoo replied that he was really confused.

Khoo also insisted that he did not cheat Ms Cui of the $20,000 that she had handed him for a purported investment in gold. He said he tried his best to make profits for her.

"I took money and she did get profits. How can you say I cheated her?"

The trial will enter its third week on Tuesday (March 26), with the defence psychiatrist taking the stand.