Gardens by the Bay murder trial: Accused's wife asked if he was cheating again, texted him 'O$P$' 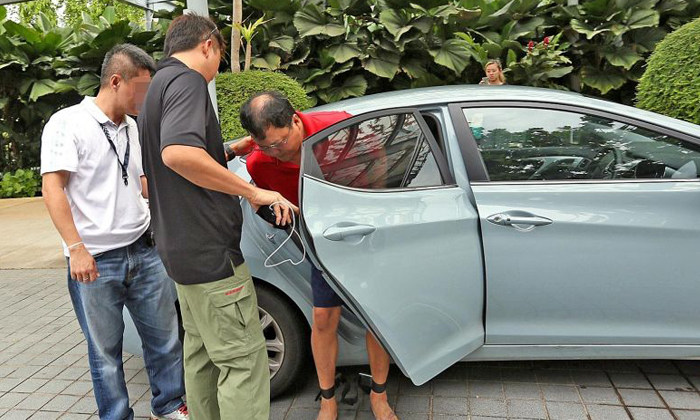 "Owe $ Pay $" was a text message that the wife of accused murderer Leslie Khoo Kwee Hock sent him in the days before he killed another woman, the High Court heard.

This and other text messages from her asking for household expenses were presented by prosecutors on Wednesday (March 20) in his ongoing trial for the murder of 31-year-old engineer Cui Yajie on July 12, 2016.

Deputy Attorney-General Hri Kumar Nair was seeking to show that Khoo, 50, was facing demands for money from both women, but was strapped for cash.

The prosecution's case is that Khoo silenced Ms Cui, who was still owed $10,000 at the time, after she threatened to go to his workplace to tell his bosses about this.

Khoo had told a psychiatrist after his arrest that he could not afford to let Ms Cui destroy his efforts to reform himself after serving jail time for cheating and being forgiven twice by his wife for adultery.

On Wednesday, Mr Nair took Khoo through several text messages his wife sent him in June and July 2016, asking for money and listing expenses such as car instalment payments and phone bills.

Pointing to the "Owe $ Pay $" message, the senior counsel told Khoo that she was pressing him for money. Khoo denied this, saying that his wife was just joking.

Mr Nair also took Khoo through a series of messages from his wife on July 11, a day before Ms Cui's death.

"Are u cheating at my back again?" she asked. "Who is Cui Yajie?"

The messages include an image of a Facebook message the Chinese national, who believed that Khoo was divorced, had sent on July 7 asking his wife to stay away from him.

Mr Nair said that Khoo faced a similar situation before he was jailed in 2010 when one of his lovers at the time had also confronted his wife.

"This is you reliving your past," he contended, noting that Khoo was once again having extra-marital affairs, making money from the women and having his victims confront his wife.

He noted that around that time, Khoo was asking for money from others so that he could pay Ms Cui off to "get rid of her", but he failed to raise the amount.

Mr Nair also questioned Khoo at length about the events of July 12.

Comparing Khoo's changing accounts in his various statements to the police, Mr Nair asserted: "You are making up your story as you go along."

Mr Nair also compared the "hazy" account of the killing Khoo gave in court to the detailed statements he had given to the police.

In court, Khoo said everything happened quickly and he did not know how he ended up strangling Ms Cui. In a statement, he gave details such as grinding his teeth and grabbing her neck with his right hand.

Khoo said: "The officer asked me right or left hand, so I told him... in my heart, it was right hand."

Mr Nair replied: "You are trying to wriggle your way out of this. You are the true conman that you are."