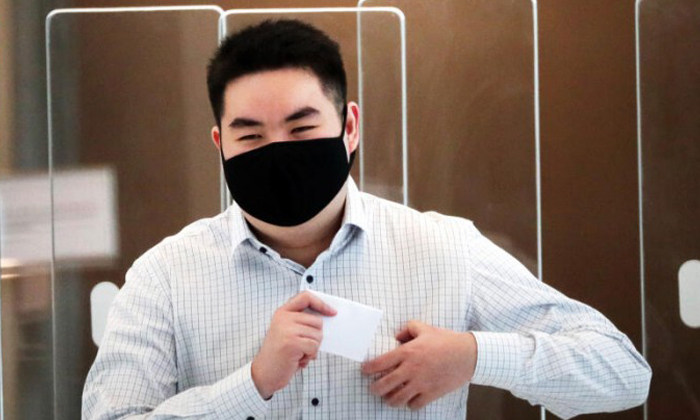 Chief Justice Sundaresh Menon on Friday (Sept 24) upheld a lower court decision to lift a gag order on the name of a student from a top British university who had filmed voyeuristic videos of several women.

Colin Chua Yi Jin, 23, had pleaded guilty on July 29 to seven counts of insulting the women's modesty and an offence under the Films Act.

The gag order remains on other details that could lead to the identification of the victims. This includes the victims’ identities, their relationship to Chua, and the name of his university, where he started studying in October 2018.

The clips he recorded involved 11 women, whom he knew personally, on separate occasions in Singapore and Britain between 2015 and 2018.

Most of the videos were taken at his residence, after he insisted on hosting gatherings for friends and invited the victims.

The videos captured the victims’ faces and bodies as they were showering, changing or relieving themselves.

On Friday, the Chief Justice said courts have the power to impose gag orders to protect victims - to prevent them from suffering further and so that victims are not afraid to come forward.

Chua’s lawyer, Mr Kalidass Murugaiyan, had applied to the High Court to object to the gag order being lifted - but Chief Justice Menon described it as a hopeless application.

He said Chua had advanced his case under the guise of protecting the victims, but it was in fact for his own benefit.

The Chief Justice also said: “A gag order has nothing to do with the benefit of accused persons.”

He noted that Chua's victims spoke with one voice and had wanted his identity revealed for a variety of reasons, despite the risk of their own identities being exposed.

“His interest counts for nothing,” said the Chief Justice, who will issue written grounds for his decision at a later date.

Chua was ordered to pay $2,000 in costs, after Deputy Public Prosecutor Nicholas Khoo said the application was “borderline frivolous”.

Chua targeted his first victim, then 18, in Dec 2, 2015, when they shared a room at hotel in Orchard Road with others after prom night.

He placed a recording device in the toilet, which recorded a 14-minute video of her showering.

In early 2016, she found out from the principal of her junior college that the video was circulating online.

On Dec 23, 2016, Chua hosted a Christmas gathering at his then residence. He placed a recording device in the toilet and secretly filmed the second victim relieving herself.

Two years later, a stranger on Instagram sent her pictures from the video and asked if she was the person.

On July 3, 2019, the police raided Chua’s residence and seized seven of his personal devices, which uncovered 16 offending videos and 124 upskirt photographs.

When Chua was first charged on Oct 2, 2019 with two charges, a gag order was imposed by a district court to protect the women's identities.

The gag order was extended to cover Chua’s name, as investigations were ongoing into other potential victims who could be related to him.

Another 17 charges were later brought against him.

On Jan 14 last year, a district judge rejected the prosecution’s request to lift the gag order on Chua’s identity – there were then 12 victims, and only 10 had supported the move.

One of the remaining two victims later changed her mind. The other was overseas and her family did not want her to be contacted.

On June 8 this year, the prosecution withdrew four charges against Chua, including the single charge involving the victim who was overseas.

This means Chua was now faced with charges involving 11 victims, who all supported the lifting of the gag on his name.

On July 29, the prosecution applied again to lift the gag order on Chua’s identity, and the district judge agreed.

The prosecution said there was public interest in identifying the accused and he should not be allowed to hide behind the gag order.

The prosecutors had argued: “Both retribution and deterrence can only be given full weight if the accused is identified and publicly held responsible for the crimes that he has committed.”

Chua has been found to be unsuitable for probation.

For each charge of insulting a woman’s modesty, an offender can be jailed for up to a year and fined.

No date has been set for sentencing.

It is rare for gag orders to be lifted, as such orders covering an accused person’s identity are imposed only when there is a need to protect a witness’ identity.

In November last year, the High Court lifted a gag order that was wrongly imposed in the case of Johnboy John Teo, who had killed his two-year-old daughter.

Victims felt anguished and powerless that perpetrator could hide in anonymity

The 11 women who were secretly filmed by Colin Chua Yi Jin between 2015 and 2018 supported the lifting of a gag order on his name, at the risk of their own identities being exposed. This is what some of them said in their victim impact statements:

Victim No. 2
“I feel anguished when I found out that there is a gag order against the accused, as he could ‘hide’ behind the gag order and continue with life as per normal.”

Victim No. 3
“Not being aware of his crimes, I even encouraged him to meet my friend (the 11th victim), which (resulted in her) becoming another victim. This made me feel very guilty.”

Victim No. 4
“I felt very worried and powerless when I saw the accused posting on social media with other female friends. I could not warn them because of the gag order on the accused’s identity.”

Victim No. 9
“In the days after news came out about the investigation, I distanced myself from him, without knowing that he had filmed me too. He had the audacity to ask if we still wanted to be friends.”

Victim No. 11
“I also feel that the gag order is meant to protect the victims and not the perpetrator. (But) I fear that even more people could be hurt by the accused, as his identity is masked.”

Related Stories
Singaporean studying at top British university charged in court after allegedly filming women in toilets
NUS student who filmed 2 women in the shower on campus gets 2 weeks' jail
Repeat offender back in jail over upskirt videos of schoolgirl, 13, and woman, 27
More About:
obscene
pervert
Voyeurism
court
Peeping Tom