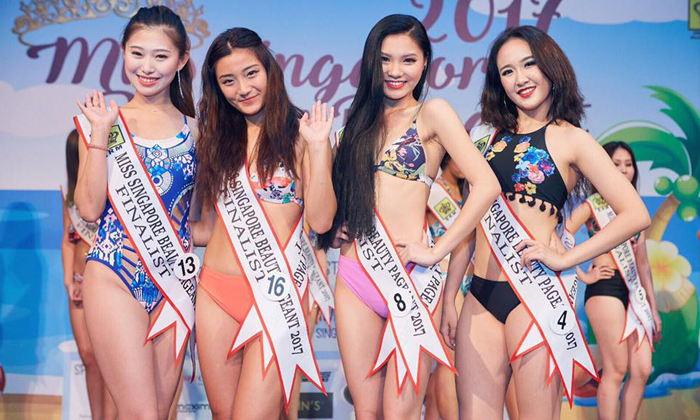 For those who are confused, the Miss Singapore Beauty Pageant is not affiliated in any way to the Miss Universe Singapore and Miss Tourism Global Singapore beauty pageants.

The latter two are strictly open to only Singapore citizens.

Meanwhile, the Miss Singapore Beauty Pageant is open to both Singaporeans and Singapore PRs from 17 years old.

The organiser of the pageant, ERM Singapore Marketing, confirmed that six of the 19 finalists in this year's competition are permanent residents, with three originating from China and three from Malaysia.

According to The Straits Times, the pageant, will yield four winners under different titles who will go on to represent Singapore internationally under each title.

It was earlier reported that an unofficial photo of the Miss Singapore Beauty Pageant 2017 finalists drew flak from netizens, who questioned the calibre of the participants.

Comments ranged from "Is this for real?" to those slamming the women's physical appearances and their attractiveness.

The picture was taken when the women were doing a talent and fashion showcase at OneKM mall in Katong last Saturday.

Contestants will have makeovers over subsequent weeks as part of the competition, and the pageant organiser said the picture circulating online was taken before the makeovers.

In addition, netizens also questioned the legitimacy of the event, but the organiser said the pageant has been running for 29 years with its winners going on to represent Singapore globally, reported The Straits Times.

However, the contestants themselves had different opinions.

Finalist Nur Amelina, 21, said: "As long as they are Singaporeans or residents, they are allowed to join the competition. So I don't see why they can't represent Singapore."

China-born finalist Honey Tian, 25, who has been in Singapore since she was eight, said it should not matter where contestants were originally from.

"A lot of us (PRs) have been here for a really long time and we love this country. We are proud to represent Singapore," she added.