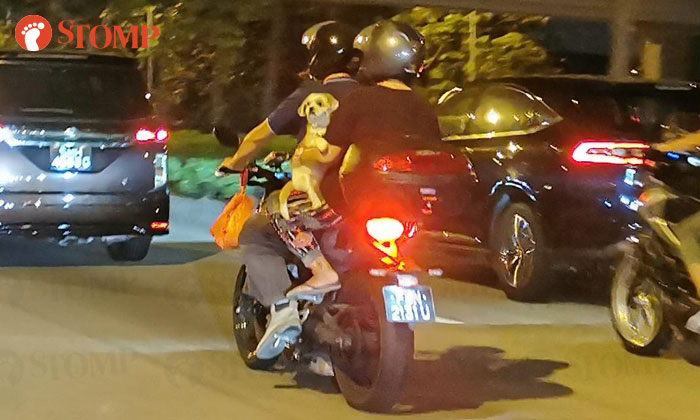 Many motorcycle riders have found ways to transport items previously thought impossible on a two-wheel vehicle.

Most recently, a couple was seen riding with a dog in the pillion rider's arms as they travelled along the Central Expressway (CTE) on Tuesday evening (July 30).

Stomper LJ spotted the unusual sight and shared a photo she took with Stomp.

She said that it happened at about 9pm near Ang Mo Kio.

In a phone interview with Stomp, she expressed how hazardous the situation must have been for the dog.

"He looked worried as he was held by the passenger but he did not squirm or move around," she said.

"I wonder if it is really safe.

"What if he accidentally falls off the bike and gets run over by another driver?

"I have to say, it was quite cute though."

Related Stories
Doesn't this motorcyclist have a safer way of transporting metal ladder?
Woman ferries 2 kids on motorised scooter at Yishun Ring Road, both of whom don't have helmets
YOLO? Youth on electric scooter cuts in front of car in Yishun -- while transporting box
More About:
dangerous
dog
motorcycle
expressway
unusual sight