Funny or dangerous? Blogger Xiaxue says ghost stickers on cars should be made illegal 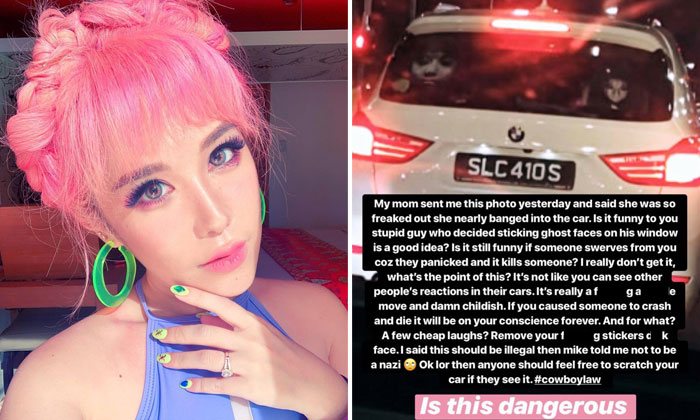 Imagine driving on the roads at night and suddenly coming face-to-face with a couple of 'ghosts'.

However, you later discover you did not have a close encounter with some spectres... it was just ghost stickers on the back windscreen of a car.

Does the shock factor of these decals make driving unsafe for other road users?

Stomper Edwin alerted Stomp to Xiaxue's series of Instagram Stories after her mother encountered a BMW driver who had put ghost stickers on the back of his car.

She wrote that her mum was "so freaked out" that she almost drove into the BMW.

"Is it funny to you stupid guy who decided sticking ghost faces on his window is a good idea?

"Is it still funny if someone swerves from you coz (sic) they panicked and it kills someone?

"I really don't get it, what the point of this?

"It's not like you can see other people's reactions in their cars."

She also called the driver childish and said that such decals should be made illegal.

According to a casual poll she posted on Instagram, 95 per cent of her followers who saw the story agreed that such stickers are dangerous to other drivers.

She shared a conversation she had with a follower who had encountered the same car. 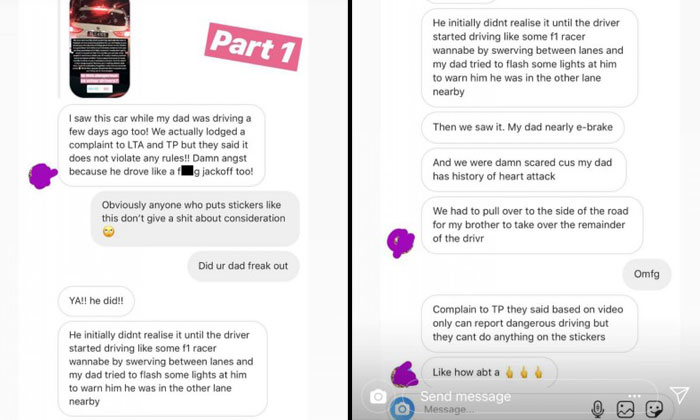 The netizen said her father, who has had a heart attack before, almost had to activate his emergency brake after seeing the BMW with the stickers.

He later pulled over by the side of the road so that his son could take over driving for the rest of the journey.

Xiaxue also listed reasons why she believes ghost stickers should be banned and even suggested civilians "handle it ourselves" if the authorities cannot do anything about it. 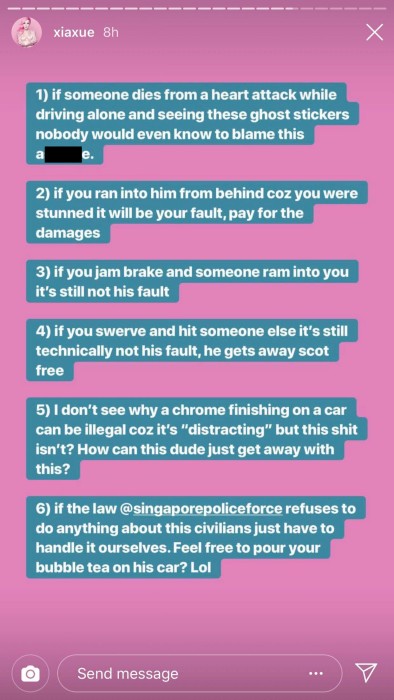 What do you think? Are these stickers amusing or dangerous?

Let us know in the comments below.

Related Stories
"What beautiful eyelashes you have!": Cool vehicle makes Lau Lup's day
Do all of these even do anything? Look how many switches and dials this car has
Gold car on AYE needs an equally flashy licence plate to match
More About:
dangerous
scary
ghost
BMW
Xiaxue