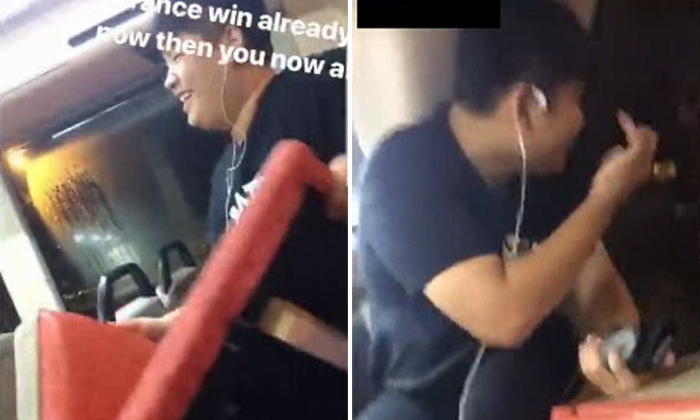 A youth displayed various silly antics -- from removing a bus seat to flashing his middle finger -- while being filmed by his very amused friends.

Stomper Myles alerted Stomp to a video of the boy's behaviour, after his son came across it on Instagram Stories and shared it with him.

"My son studies in the same school as the youth," Myles told Stomp.

In the video, the youth can be seen on the last row of seats on a bus.

He then removed a seat from its position, before holding it over his head and cheering.

The boy repeated this action again, and can then be seen sitting with his feet stretched out on multiple seats -- while in socks.

Finally, he got up onto a ledge and flashed his middle finger, apparently at motorists behind the bus, though it is unclear if there was anyone there.

Myles told Stomp: "This youngster vandalised the bus seat while his friends recorded him.

"He is giving his school a bad name and showing that he hasn't learned anything worthwhile."

Myles also said he is worried that his son would be influenced by such bad behaviour.

Related Stories
Youth climbs over railing, pulls down shorts and smacks his buttocks in middle of the road
Youth smokes on bus, replies to comments on video: "I'm supposed to get a pack for the dare"
Guys smoke e-cigarette and cigarettes on bus -- then film themselves and post video on social media
More About:
Youths behaving badly
inappropriate
inconsiderate
Bus