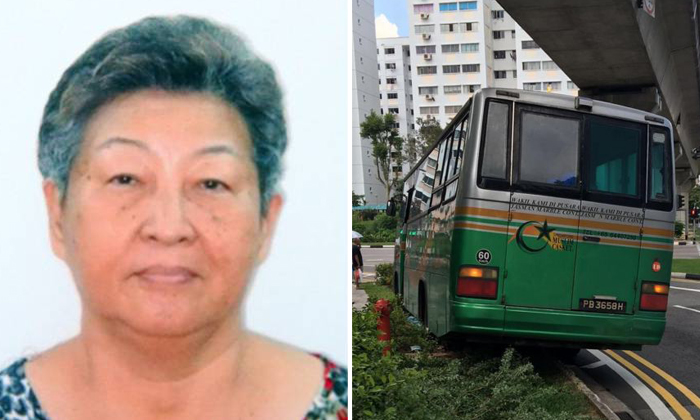 An unmanned funeral bus which rolled down a slope and hit an elderly woman, killing her, had an ineffective handbrake.

Giving her findings about the death of 68-year-old Madam Ong Lim in September 2016, State Coroner Kamala Ponnampalam said on Monday (Aug 5) that the handbrake had to be pulled up for nine clicks for it to become effective.

According to a mechanic, this is three or four more than a normal brake would need.

She also noted that the bus, used as a hearse by the Singapore Muslim Casket and Marble Contractor, was almost 19 years old at the time of the accident and subject to half-yearly inspections.

State Coroner Kamala, who found Madam Ong's death to be an "unfortunate traffic misadventure", said that the vehicle's last motor vehicle inspection prior to the accident was carried out on April 19 that year.

It was then certified as having complied with the statutory requirements under the Road Traffic Act.

"It would appear from the mechanical inspection that the handbrake, which was ineffective, had not been fully applied when it was parked on a downward slope along Bukit Panjang Ring Road," she said.

"The weight of the bus had caused the motor bus to roll down the slope, mount and dismount the kerb on the left before colliding into Madam Ong and causing her serious injuries which resulted in her death."

The driver, 62-year-old Mr Mohamed Ramlee Mohamed Ali, had earlier stated that before the tragedy occurred at around 10am that day, he had driven the bus to the far left of the three-lane Bukit Panjang Ring Road, as he wanted to go to a nearby mosque to pray.

Mr Ramlee said he parked on a slope then pulled up the handbrake until "it could be pulled no more", turned off the engine and alighted.

At around 10am, a witness saw the vehicle travelling down the slope before stopping along a grass verge before a slip road.

The man did not see it hitting Madam Ong but he later spotted her lying face-up on the ground.

She was taken to the National University Hospital in a critical state and died of multiple injuries at around 11.30am that day.

Mechanic Lim Kean Keong inspected the bus later that month and found that he had to use both hands to pull the handbrake all the way up to nine clicks.

Senior automotive engineer Mr Tan Jit Shee, who also inspected the vehicle, found the handbrake was ineffective if not pulled to the maximum nine clicks, and the bus could move forward.

He stated in his report: "I would like to state that at nine clicks, the handbrake is too high, as extra effort is required to pull to nine clicks. The high handbrake is due to wear and tear of parts and improper adjustment of handbrake height."

Mr Tan also stated that a vehicle parked on a slope should have at least a choke block placed behind a wheel.

On Monday, Mr Ramlee's lawyer, Mr Deepak Natverlal told The Straits Times that his client had earlier been charged with causing Madam Ong's death by performing a negligent act.

However, the driver was given a discharge not amounting to an acquittal on the first day of the trial in January last year after the lawyer told the court that there could have been issues with the handbrake. This means Mr Ramlee can be prosecuted if new evidence were to surface.

Mr Ramlee, who was also present in court on Monday, said that he is still working for the Singapore Muslim Casket and Marble Contractor but is now driving a van.