Full fight videos of ONE Championship's Conquest Of Champions: Amir Khan vows to get better 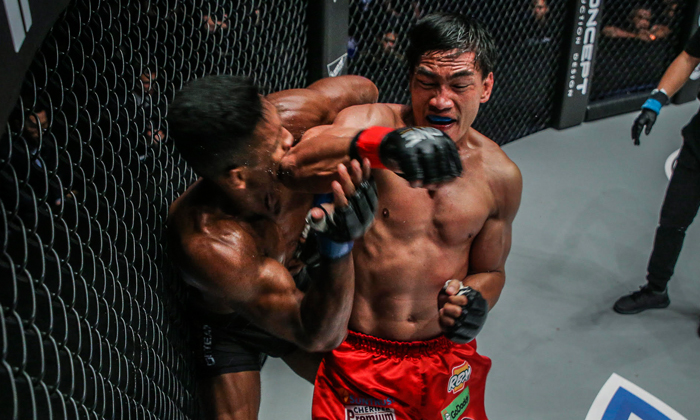 At ONE: Conquest Of Champions, a new lightweight king was crowned, a heavyweight titleholder reaffirmed his place at the top of the division, and several up-and-coming athletes made a name for themselves.

The card featured a pair of Singapore-based competitors who were looking to propel their respective careers at the Mall Of Asia Arena in Manila, Philippines.

Here is how our local athletes fared, as well as the reigning ONE Heavyweight World Champion.

Two explosive strikers clashed in the co-main event, as the Philippines' Eduard "Landslide" Folayang and Singapore’s own Amir Khan battled each other for the right to become the new ONE Lightweight World Champion.

Folayang used his renowned wushu kicks to negate the reach advantage of Khan. Also, he used top-notch striking from the distance and inside the clinch.

Meanwhile, Khan took the match to his Filipino rival, going toe-to-toe with the former titleholder while on the feet and relentlessly hunting for takedowns throughout the contest.

It took all five rounds to finally crown a new champion, and in the end, it was Folayang who would emerge victorious. He reclaimed the gold he lost at the same venue just a year ago.

Khan, who is now back in Singapore, acknowledged the result in a two-part video post on his official Instagram page.

"First of all, I would like to thank everyone who supported me for this fight, especially my family, friends, fans, and my team at Evolve MMA," he said in the video.

"I know it wasn't the result we wanted, but fair play to Eduard Folayang — he was the better man that night.

"I managed to take a glimpse of my full fight video and realized the mistakes that I made, and it’s time to move on, and to learn, and to get better. You fall down seven times, you get up eight."

In the second part of his video post, Khan also hinted at some big news coming up next week.

The long-awaited return of Brandon "The Truth" Vera had fans roaring in anticipation as he faced a tough challenger in Italy’s Mauro "The Hammer" Cerilli, who was looking to become just the second ONE Heavyweight World Champion.

Cerilli started cautiously, but quickly grew comfortable and mixed it up with the champion, as he aggressively closed the distance between them.

However, Vera showed no signs of ring rust despite nearly two years away from the sport. He chased his opponent away from the cage, launching his powerful kicks at him and using his incredible agility to evade the Italian’s powerful punches.

Just over a minute into the contest, “The Hammer” managed to land a left hook on the champion, but his momentum increased the effect of Vera’s counter left hook, which instantly dropped Cerilli to the canvas.

The referee immediately stepped in to stop the contest at the 1:04 mark of the first round, giving Vera a successful second defense of his crown.

Singapore-based Indian Rahul "The Kerala Krusher" Raju and the Philippines' Honorio "The Rock" Banario had a three-round war this past Friday.

The Indian warrior, who represents Juggernaut Fight Club, had a clear game plan of neutralizing the hometown hero’s striking power, while aggressively going for takedowns throughout the catch weight affair.

Banario, a product of Team Lakay, displayed his striking superiority, but held his own on the ground. He even managed to lock in an armbar near the end of the second round, and almost choked out his opponent in the dying seconds of the bout.

In the end, the judges awarded a unanimous decision to "The Rock".

Even in defeat, it was an impressive showing for Raju. He pushed Banario well beyond his limit, despite taking the bout on four days’ notice as a late replacement for South Korea’s Dae Sung Park.

Check out a post-event recap of ONE: Conquest Of Champions in the video below.

Related Stories
Amir Khan falls to Eduard Folayang in Manila
Amir Khan set to capture gold in Manila
Check out 23-year-old Amir Khan's fastest knockouts of his career inside the ONE cage
More About:
ONE Championship
Amir Khan