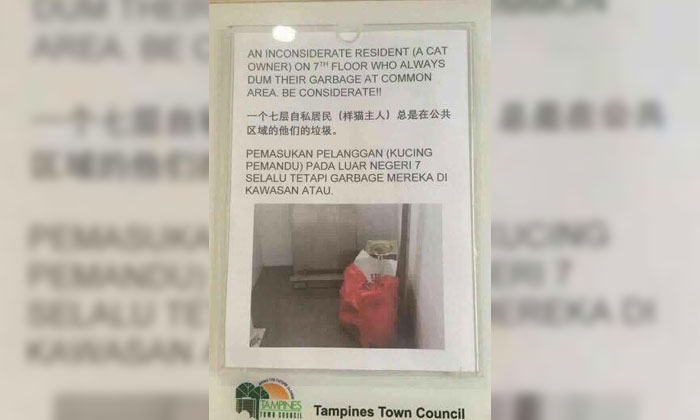 A Tampines resident who was frustrated with one of his neighbours for dumping garbage in a common area decided to put up a notice expressing his displeasure.

He placed the notice in a Tampines block's notice holder with his message written in three languages: English, Malay and Mandarin.

A photo of the notice has been making its rounds online but not for the reason you think.

Apparently, the person who wrote the notice did not feel it was necessary to double check his translations.

In the English version alone, he already misspelt "dump" as "dump".

The Malay translation of the message reads:

"The entry of customers (cat driver) overseas 7 always but their garbage in area or."

The Mandarin translation does not make much more sense:

"A 7th-storey selfish resident (owner who looks like cat) always at public area's their rubbish."

The notice has confounded netizens and has even caught the attention of Member of Parliament for Tampines GRC Baey Yam Keng.

The MP clarified on his Facebook page that this was an unauthorised notice and warned residents that these notice holders are not for personal use.