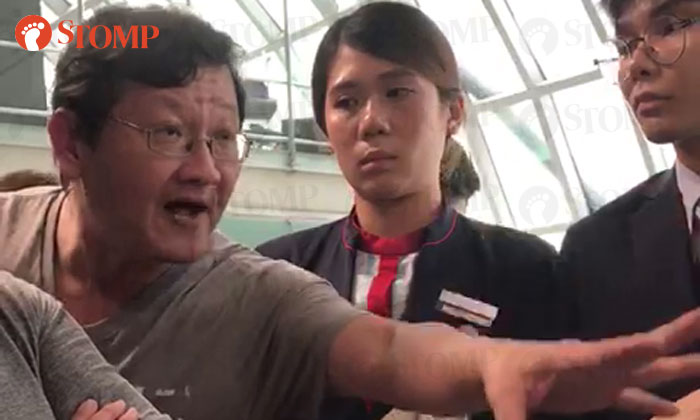 Passengers on a Jetstar flight from Bangkok to Singapore expected to reach Singapore on Nov 29 but instead, were stranded at Suvarnabhumi Airport for nearly 24 hours.

Stomper AMadSingaporean informed Stomp that he was scheduled to depart Bangkok on flight 3K1514 at 9.20pm local time on Wednesday (Nov 29).

However, they were informed that the flight was postponed to 12am.

"After reaching the gate, they put up a sign saying 'Jetstar Bangkok to Singapore, indefinite delay'," said the Stomper who was in Bangkok for business.

He told Stomp that their flight was then further postponed to 2.20pm on Thursday (Nov 30) and the passengers were provided overnight accommodation at a hotel.

However, when they arrived at the airport the next day, their flight was delayed again without notice.

When they arrived at Gate G1A, they discovered it was assigned to passengers flying with Hong Kong Airlines instead.

The Stomper shared a video taken at the departure gate, showing the passengers expressing their frustration over the delays to an airport employee.

She asked for their patience and to give her one hour to confirm the details of their flight but one woman shouted:

When the woman said she cannot provide any confirmation, a man shouted at her:

"You are not confirmed, why you come here? You spend so much time in the back room do what? (sic)"

"We have waited enough already," another woman chimed in.

The passengers also expressed frustration at having to take an extra day off of work because of the delay.

In response to Stomp's media queries, a Jetstar spokesman said that the delay was due to a "series of technical issues with the aircraft".

"We apologise to all affected passengers who had been inconvenienced by the delay of 3K1514 from Bangkok to Singapore on 29 November 2017," she said.

"Our engineers on-ground worked hard to conduct tests on the aircraft but it has taken longer than expected," she added.

She confirmed that the flight was rescheduled to depart at 8pm local time and would arrive in Singapore at 11.30pm on Thursday.

"To ensure the well-being of our customers, passengers were provided hotel accommodation and meal vouchers including refreshments at the airport," she said.

"The safety of our customers and crew is always our top priority.

"Once again, we apologise to all customers and thank them for their patience."

Related Stories
Passengers stranded at Bangkok airport after Scoot flight rescheduled to next day -- only to be delayed further
Stomper and other passengers stranded at Xi'an hotel after Tigerair flight cancelled twice
Friends and families waiting for loved ones arriving from Hokkaido...you've got to wait a little longer
More About:
angry
flight delay
airport