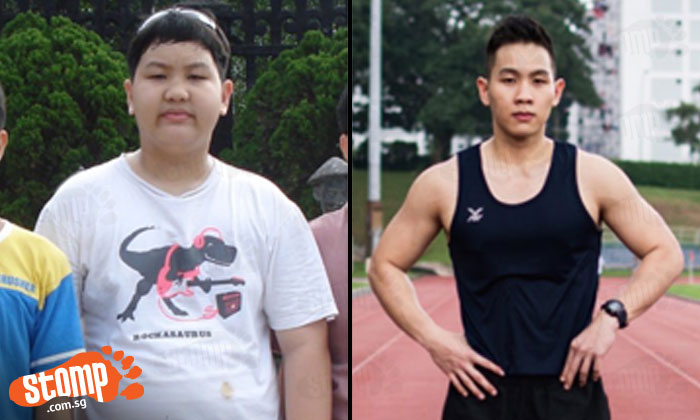 Here's some inspiration to help complete your week.

The Stomper documented his journey from chunky to hunky in a blog aptly titled 'Once a fat Sam'.

In his blog, Sam stated that he weighed 125kg at his heaviest and detested weight-loss machines and mirrors.

He also said he was bullied in class and was the butt of jokes in the past.

Sam tried losing weight through several means, but became dejected after realising that they were not working.

However, as the saying goes, if at first you don't succeed, try, try again.

Said Sam on his blog:

"The breakthrough finally came on a fateful night. I vividly remember it, as though it was just yesterday. It was a slightly rainy night, and I decided to go for a run out of the blue. I just felt so sick and tired of being 'sick and tired', literally. So, I grabbed a shirt, put on my running shorts and went for it."

Since then, he has never looked back.

Sam has been exercising regularly since that night. Other than running, he also incorporates other static exercises into his regime.

"Within a year from that fateful day, I have shed over 30 kilograms, going from 125kg to about 90kg. That was when many people around me started to notice the change and started to ask for me “secret formula” of success. After losing all that weight, and becoming a much more health-and-fitness conscious person, I started to develop a keen interest in areas of weight loss patterns & philosophy, continued the Stomper."

Since then, he has continued to lose weight and develop a more toned physique. He now weighs 80kg, and looks a lot better then he used to.

Sam hopes to inspire others who want to be like him through his blog. If you've decided that it's time to stop giving yourself excuses, you can take a look at his blog here.

Have a look at photos of Sam's incredible transformation in the gallery above.