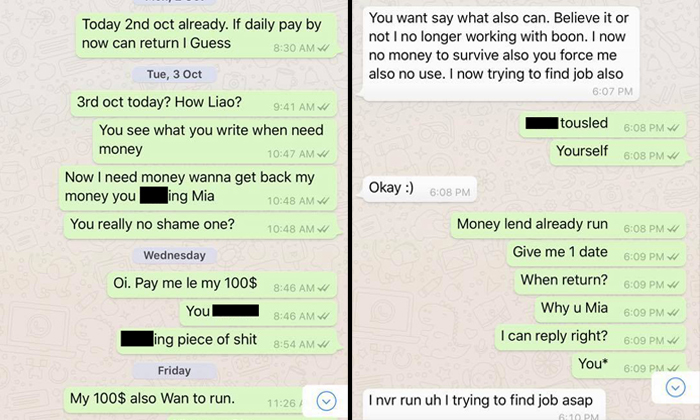 There is a reason why so many people say the talk of money can ruin even the closest of relationships.

Take this two friends, for instance, who went from heart emojis and calling each other bros to spewing vulgarities in a WhatsApp exchange.

Screenshots of the conversation were shared online by Facebook user Soon Wei Chiang, who had loaned $300 to his friend.

However, it seems that his friend, whose name is now saved as 'F***ing Piece Of Shit' in his contact list, only returned $200 before starting to default on payment.

Despite several deadline extensions and false promises, the friend-turned-foe has yet to pay back the remaining $100.

Related Stories
Woman tells Grab driver "you will soon meet with accident" as he can't pick up kids below 1.35m
Online buyer goes 'MIA' and 'blue-ticks' guy after agreeing to meet up
Guy borrows money from friend saying his mum passed away -- then goes MIA when asked to return
More About:
money
text
dispute