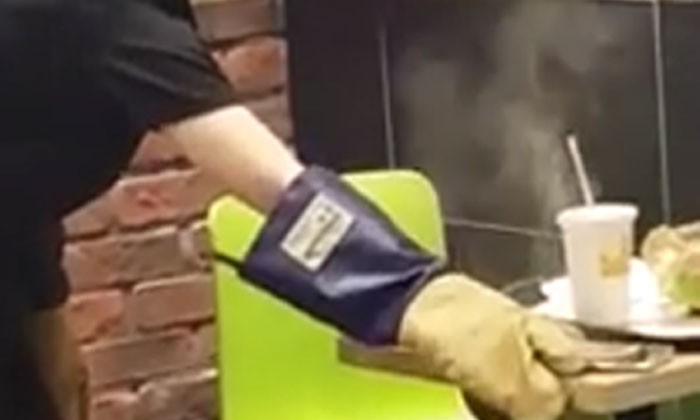 The video has almost one million views since it was posted on Youtube on Saturday (Oct 9), two days before Samsung announced a global halt to sales and exchanges of the Note 7.

The Burger King employee was wearing large heat-resistant gloves to remove the flaming phone from the table.

However, the phone was dropped to the floor, causing some onlookers to shriek in fear.

According to AFP via Business Times, a Samsung spokeswoman has confirmed that the device is indeed a Note 7 without elaborating any further.

The manager of the outlet told an online news website, Wikitree, that the store had requested compensation from Samsung for the damage to the table.

Complaints regarding the phones' lithium-ion battery exploding while charging has forced Samsung to issue a worldwide recall of the model in early Sep.

It was a disastrous move as a week ago it was reported that the replacement phones were also catching fire.

According to Strait Times, Singaporeans with Samsung Galaxy Note 7 can take a loan phone in Westgate however no refund has been offered.

The video was posted by jinhee Kim on Youtube.

Related Stories
Be careful when charging your phone in the car -- it might go up in flames
Stomper gets replacement battery from Sim Lim Square for Samsung tablet -- only to see it 'balloon' after two months
iPhone explodes in student’s pocket and sets him on fire
More About:
fire
samsung
oven glove