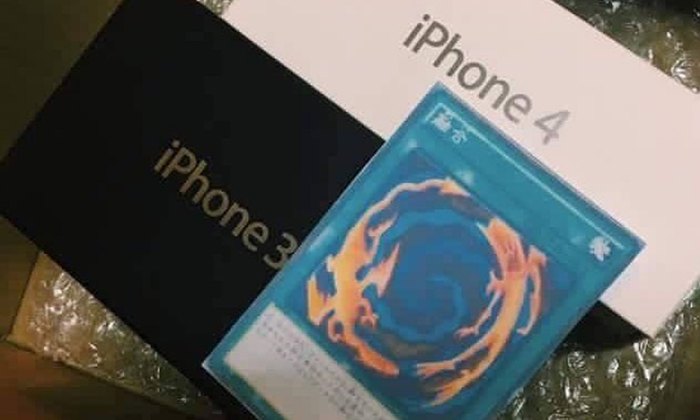 Is this plain ingenious or simply cunning? A woman in China ordered an iPhone 7 online, but received an iPhone 3, iPhone 4, and a Yu-Gi-Oh card instead.

With the release of the first batch of Apple’s long-awaited iPhone 7 in China, desperate consumers have started looking all over the web for ways to purchase the highly sought-after phone.

However, as online buyers can’t physically inspect the purchased item, there have been various instances where iPhone purchasers have received a pear phone, or a pancake.

This time round, one crafty seller decided to play a math prank on a woman buyer by mailing to her an iPhone 3, iPhone 4, complemented by a Yu-Gi-Oh card.

According to Shanghaiist, the theory behind the 'Fusion Monster' Yu-Gi-Oh card is that it symbolizes a combination of two or more monsters, and in this case, two iPhones.

By merging together an iPhone 3 and an iPhone 4, one would get an iPhone 7.

The buyer snapped a photo of the rather unusual products she received and uploaded it on Weibo, garnering over a thousand shares and numerous comments.

"If you can buy two iPhone 7s, you can use a Fusion Monster to turn it into a futuristic iPhone 14," one netizen cheekly commented.

Another suggested that the buyer lend the Fusion Monster card in exchange for an iPhone 7.

You can take a look at the hilarious package the buyer received in the gallery above.