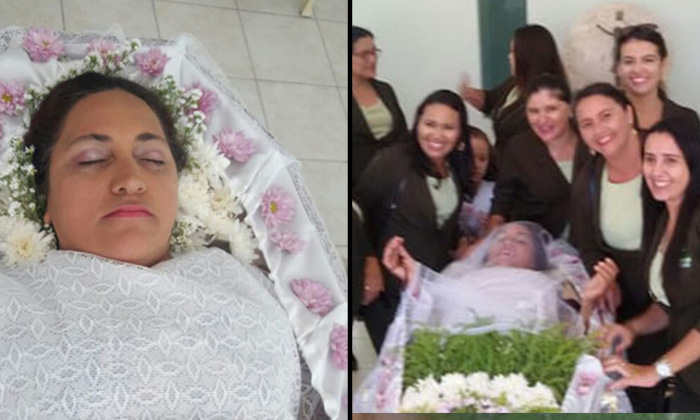 For most people, learning a new language, or staying in a new city are things to include in a bucket list. However, for this woman, hosting her own funeral by lying in a coffin all day is all that she could ever dream of.

Little Things reports that 44-year-old housewife Vera Lucia da Silva has always been fascinated with funeral ceremonies. She has even been known to frequent them in her spare time.

For years, Vera’s friends and family were against the idea, and her husband was simply not having it.

It was way too dark and morbid for them to bear, and understandably so.

But Vera recently convinced her loved ones to support her in her bizarre life’s wish, and a video of her fake funeral is going viral.

The funeral was held on the Day of the Dead, a holiday that focuses on gatherings intended to pray for and remember friends and family members who have died, and support their spiritual journey.

Vera’s wake lasted from 9am until 6pm.

Her friends applied her makeup, as funeral parlour assistants dressed condolence flowers on top of her body.

Remaining completely still inside the coffin, the only real movement Vera made was to turn her head to drink coconut water.

Guests included Vera’s mom, dad, siblings and friends. They dressed in all black and visited her throughout the day to show their support.

They snapped selfies, cried, and even laughed around the coffin.

Vera dressed in a white, lacy gown with her hands wrapped in rosary beads, crossed on her abdomen.

But before the ceremony was over, Vera made one final request.

“To complete my dream, I asked the funeral director to cover the coffin with the lace top and the lid."

“Then I asked them to carry me around for a few minutes, as if they were taking me to my burial," she added.

Vera says it was the best day of her life — but that she is “not ready to die just yet.”

Even if you think Vera’s wish is “crazy,” you must admit she’s lucky to be surrounded by so much love and support.

Related Stories
Rest in peach: Apple gives the peach emoji a makeover and people are in mourning
Woman takes revenge on her cheating boyfriend who wants his money back
Women all over Asia are balancing objects on their chests -- thanks to an anime character
weird
interesting
funeral
funny
viral