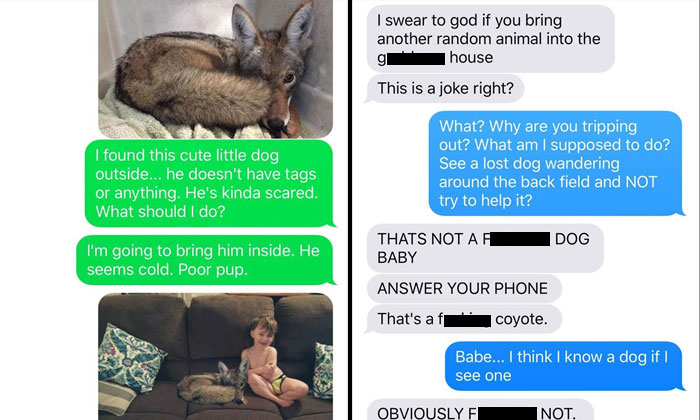 Kayla Eby's wonderful prank on her husband received an epic response from him.

This woman used Photoshop to make her husband believe that she had brought a baby coyote home.

She first sent a picture of a baby coyote curling up on a blanket, informing her husband that she had found it outside, believing it was a 'cute little dog' and had decided to bring it in.

She then continued to send Photoshop-edited pictures of the coyote on the couch with her young son, texting her husband that they had named it 'Spot'.

As expected, her husband freaked out and ordered her to put it back outside. He was so mad that he even joked about divorce.

She gave her husband an even bigger scare by saying that the coyote was making weird noises and pacing about.

The husband was so worried that he told her to bring their son and hide in their room, whilst going on a rant about how they could be killed.

Luckily, it was all fake and this woman managed to get a good laugh out of her husband's overreaction.