Will you do this for your friend? 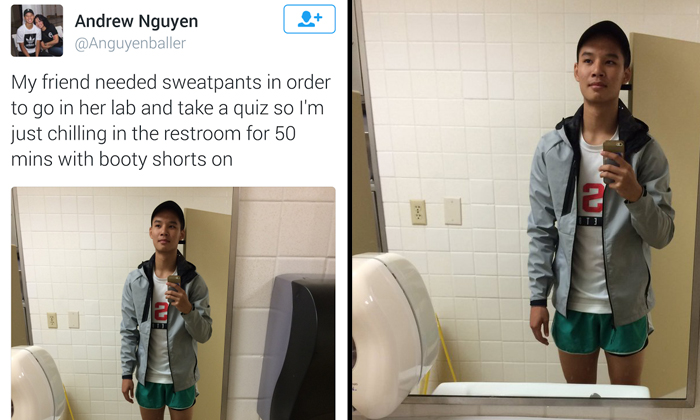 They say that true friends always got your back, but how far would you go for a friend?

Andrew Nguyen, a University of Texas at Arlington (UTA) student, took to Twitter to share about going the extra mile for his friend Diana Le by trading pants.

Posing awkwardly in front of his school’s bathroom mirror with a pair of emerald green curve cut female shorts, Andrew snapped this defining moment in his friendship with the tweet:

“My friend needed sweatpants in order to go in her lab and take a quiz so I’m just chilling in a restroom with booty shorts on.”

The tweet has since gone viral and garnered over 130,000 retweets.

According to WFAA, due to safety regulations, Diana could not enter the lab wearing her shorts, so Andrew suggested the idea of exchanging pants.

The UTA student literally took one for the team and waited in the toilet for 50 minutes until his friend was done with her quiz.

Yes, Andrew is undeniably the definition of friendship goals and the internet could not agree more.