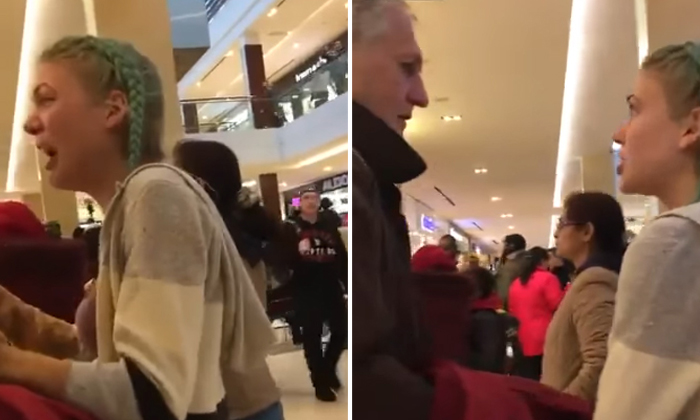 We have seen viral videos of spoilt teenagers before, but this girl is probably the one that deserves all the hate she has gotten from netizens.

A video circulating online shows a 'spoiled brat' screaming and swearing impatiently at her grandfather because they were late for an iPhone appointment.

In the video below, the pair are seen at the mall to fix the girl's beloved iPhone but waiting for food had slowed them down.

The green-haired youngster looked distraught by the situation and began shouting and hurling profanities at her grandfather:

"I don't want to wait in line for 20 f*****g minutes doing absolutely nothing when we're supposed to be at our f*****g appointment."

Surprisingly, the spoilt teen's grandfather showed an impressive amount of patience and was not affected by his granddaughter's foul language and lack of respect.

In the video, the teen is heard wailing:

"We were supposed to be there five minutes ago," she lamented, alternating between aggressively fixing her grandfather with a bitter stare and scrolling angrily on her iPhone.

"Can you please just go up there and talk to them for me and like leave me the money or something.

"You take my phone and you go up there and you talk to them."

The poor elderly man eventually gave in to her whiny pleas, handed over his bank card and took her phone to get it fixed himself while she waited in line for her food.

"Go, go, go, go," she shouted impatiently before screaming, "F**k!" as her grandfather walked off.

Even after her grandfather had left, the teen continued to scowl furiously and pace in the queue saying, "F**k" repeatedly.

She put her hand to her head in desperation as well as stomping her foot on the ground.

The video was uploaded to Liveleak by user RickyFitts829 where it racked up thousand of views, but it has since been deleted.

RickyFitts829 said of the encounter:

"I was in a mall waiting for Asian food which ended up tasting like garbage. All of a sudden this green haired girl starts cussing at her Grandpa about how they're going to be late to fix her iPhone. Merry Christmas I guess."

You can watch a copy of the video below.