Wait what? Dolphins take on the mannequin challenge!? 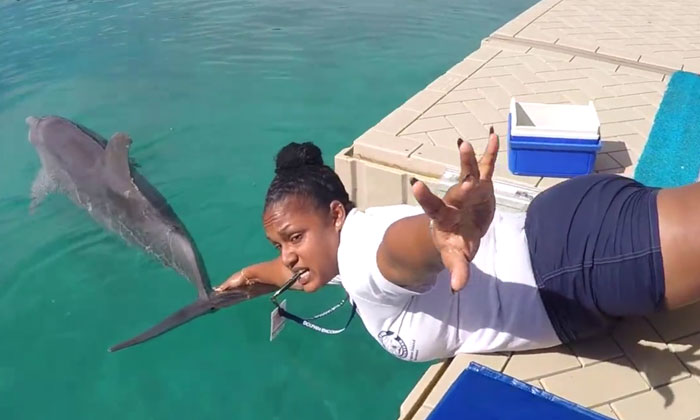 The Manneuqin challenge has been catching on of late, and now even dolphins are doing it.

And they are doing it way better than humans too -- we kid you not.

Blue Lagoon Island's Dolphin Encounter, a facility catering to tourists in the Bahamas, recently posted a video online showing three dolphins holding a motionless pose along with several people including trainers and guests.

While it's definitely unlike anything we have seen before, there is more to this clip than meets the eye.

Turns out this video was not just made to join the trend. Acccording to Ric O'Barry, founder of the Dolphin Project and star of the 2009 film "The Cove," 'staying still' like this is something dolphins are frequently coerced to do in captive settings, such as while waiting for a command.

"The dolphins in this video are performing an unnatural trained behavior called 'stationing'.

"The dolphins do this for a food reward. All of the dolphin trainers in the video are simply participating in cheesy publicity stunt, at the dolphins' expense."

If you watch the video closely, you will notice two of the dolphins being held by their tails -- barely showing a sign of willful participation.

The truth behind this harmless-seeming clip is just one of many disturbing realities behind dolphin encounter and shows. Facilities offering those experiences, and videos like the one above, often appeal to unknowing animal-lovers, but to them O'Barry offers some strong advice:

"The best thing the general public can do (if they really want to help dolphins) is to ignore the 'Captive Dolphin Mannequin Challenge' and stop buying tickets to dolphin shows."

To sign a pledge not to support dolphin shows, click here You can also make a donation to Dolphin Project to help dolphins around the world.