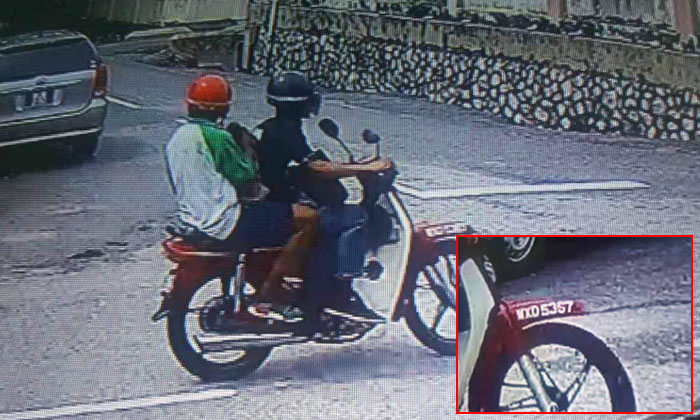 Thanks to a recent robbery footage that went viral in Malaysia, the police has confirmed that it took place in Taman Midah, Cheras on Thursday, reported The Star via AsiaOne.

The 51-second clip captured two men on a motorcycle robbing two people of their cash and mobiles before confronting the driver of a Honda at about 2pm at Jalan Midah Tengah 2.

If you listen closely, you will be able to hear the screams and blaring horns, and you will also notice one of the robbers hitting the car while a traffic cone is thrown at the other.

According to Cheras OCPD Asst Comm Chong Kok Sin, the incident occurred at around 2pm on Thursday.

"The victim was a 19-year-old woman who was chatting with a friend outside her house at Jalan Midah Tengah 2, Taman Midah, Cheras.

"Two men on a motorcycle approached them, brandishing a parang and demanded cash and valuables."

Both victims had complied with the demands and surrendered their I-phone 5, a Nokia phone and RM210 to the robbers.

"As the suspects were fleeing the scene, they hit a Honda Insight and both men were thrown off their machine.

"One of the car occupants got out and grabbed a traffic cone and threw it at the suspects.

"The other suspect waved a parang at the car driver and slashed him on the right arm," he said.

Both robbers managed to flee the scene but left behind a sling bag and watch.

"The victims did not get a good look at the suspects who were wearing helmets with dark visors.

The motorcycle they were using had a fake licence plate bearing the numbers WXD 5357 which belonged to a Proton Saga FLX.

ACP Chong urged anyone with information on the case to contact the police hotline at 03-2115 9999 or the nearest police station.