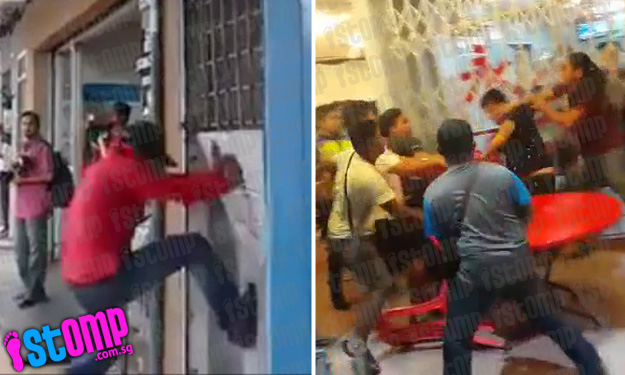 In the first video, around three to four men can be seen kicking and trying to pull apart the gate of a shophouse, possibly attempting to gain entry into the unit.

The Stomper mentioned that the shophouse belonged to a Malaysian politician.

The second video first shows a big group of men gathering outside a seafood restaurant. The door of the restaurant was then broken by an aggressor

Chaos ensued after a man in long hair started grabbing and assaulting another man while the group watched.

"Police were at the scene but they were not doing anything about what was going on.

"I hope Singaporeans will take extra care when going to Kuala Lumpur or stay away as the situation there is quite complicated.

According to The Straits Times, the controversial 'red shirt' rally in the Malaysian capital organised by Malay rights group Pesaka has been called to counter the Bersih 4 protest last month.

Critics have said the Bersih rally, which was called to demand electoral reforms, was dominated by the Chinese to challenge the political power of the Malays.