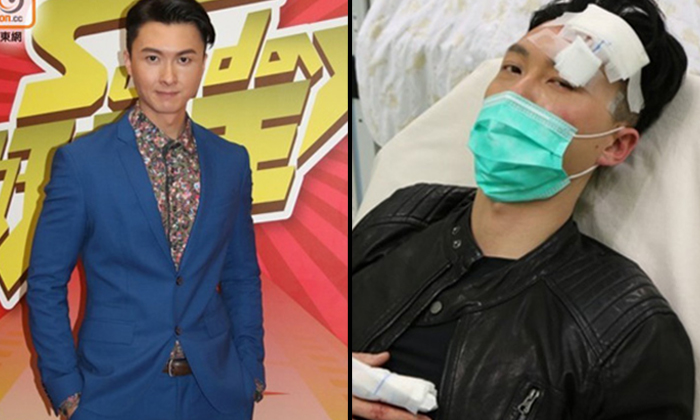 Actor Vincent Wong recently shared with reporters his experience of filming ‘Over Run Over’ <EU超時任務>; his sacrifices for the role, suffering from panic attacks and his struggle against Post-Traumatic Stress Disorder (PTSD).

During a botched car chase scene for ‘Dead Wrong’ <致命復活> in February, Vincent lost control of his car and crashed into a larger vehicle, reports Jayne Stars.

While he sustained injuries to his forehead and hands, the PTSD he suffered after the accident made the situation worse.

When he returned to work after being released form the hospital, he suddenly got a panic attack during filming and ran off the set.

He found himself frozen in the knees after and unable to utter a single word, although he did not want to solicit help from bystanders.

Despite this, Vincent did not consult a psychiatrist.

“I did a physical checkup, but did not go for a checkup on my mental and emotional state.

“Because I have experienced depression in 2012 and went to see a doctor at the time, I knew how to handle it.

“Fortunately, I was fine when the drama finished filming.”

Vincent also thanked his wife, Yoyo Chen (陳自瑤) for her unwavering support during his ordeal.

“Actually, after the accident, I had an epiphany.

“I saw my wife coming in to visit me.

“She looked at me with teary eyes and I thought i suffered a serious head injury.

“She was very worried, and every day, she would ask me whether I had to do anything dangerous at work.”

Related Stories
Woman shares terrifying experience of getting assaulted and slashed thrice by thieves near KL shopping mall
Man punches aunt after she rejects his leave, leaving her with bloody and fractured nose
Man robs masseuse, sexually assaults her for an hour and threatens to kick her private parts
entertainment
trauma
Traumatic
PTSD
Traumatic
inspiring
Vincent Wong suffered from PTSD