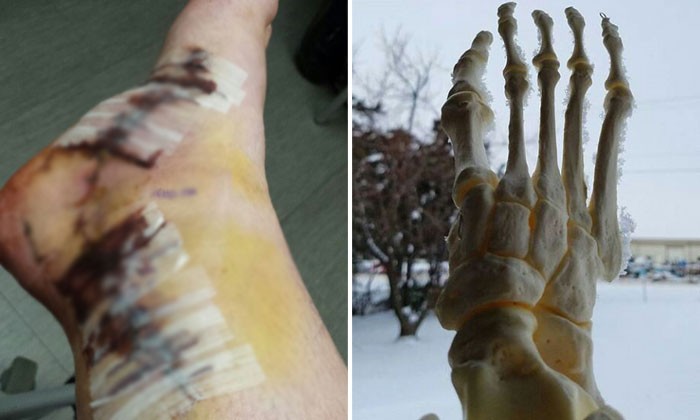 Kristi Loyall from Oklahoma, America, had her foot amputated and sent the bones off to be cleaned up, whitened and wired together before creating an Instagram account for it which is now being followed by 12,000 people.

The 25-year-old experienced numbness in her tiniest toe which gradually spread and was diagnosed with a rare type of cancer in her right foot.

The only solution was to have it amputated.

According to BBC via The Straits Times, she said, "My first reaction was to make a joke of it.

"Then I realised, I actually wanted my foot back."

The doctors found her request rather "unusual" but obliged and handed her back her foot in a biohazard bag.

Loyall said, "At that point, I was emotionally separated from it."

"I had a lot of time to deal with it at home so at that moment I was excited about starting to make a joke out of the situation."

The idea to make an Instagram account of the foot came from a friend and they sent the bones off to get cleaned up, whitened and wired.

The Instagram account was named One Foot Wander and funny photos can be seen of the foot with things it could have kicked or done something with and in many different places.

She mentioned, "I don't have money to travel that much so it just goes with me wherever I go and if I see something or have an idea of something funny I just take a picture of it."

"Usually, I keep it in a shoe box in my backpack.

"I think most people when they see me taking pictures of it, I don't think they think it's real."

Loyall is now cancer free and is hoping to take her skeleton on even more exciting adventures.

Loyall said, "I have a scan every three months to make sure it doesn't come back... but right now my scans are all clear and I don't have any cancer at all.

"Eventually, I hope to travel the world with my foot. I've never been on an aeroplane. I don't know how that will work."

Related Stories
You'll lose faith in the Internet after seeing what this Instagram beauty looks like in real life
Instagram personality sells luxury handbags for $2,000 each -- then returns fakes to stores
Woman posts epic photos after going on honeymoon -- by herself
cancer survivor
cancer
instagram
popular
amputated
skeleton
One Foot Wander