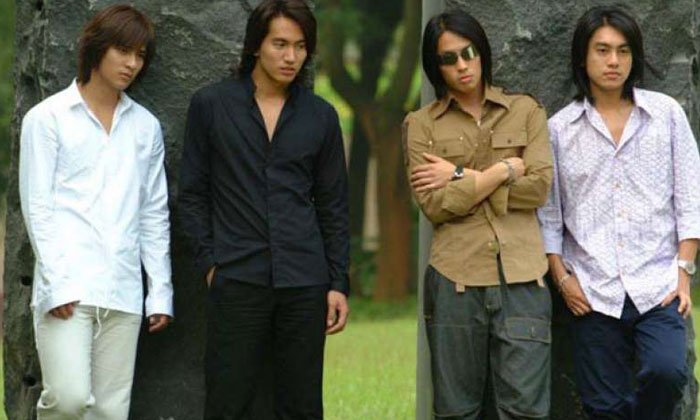 The 2001 show, which shot Jerry Yan, Vic Chou, Ken Chu and Van Ness Wu to superstardom as F4 across Asia, was drawn from the Japanese comic series Boys Over Flowers, which had not ended at the time of the shoot.

The 48-episode reboot will be a fuller - and flashier - adaptation of the books, said newspapers including Apple Daily. It will be made for NT$720 million (S$33 million), or NT$15 million per episode, with Chinese companies including Mango Entertainment. That is 30 times the budget for the 2001 drama, which was made for NT$500,000 per episode.

Chai announced the reboot on Weibo, following a nostalgic post by Barbie Hsu, who played Yan's romantic target, Shancai, in the 2001 show.

The actress shared three photos taken with the producer, saying they had reminisced about the past recently. She added: "She knows I'm honest, but still told me a secret. I'll wait for her to tell you herself."

Chai then wrote on Weibo: "On April 12, 2001, 16 years ago, Meteor Garden premiered and it was the beginning of a beautiful dream."

She thanked Hsu for keeping her company then and now, before writing: "Yes! Meteor Garden is being remade! An all-new Meteor Garden belonging to your youth!"

The announcement sent a wave of nostalgia over the Chinese Internet, but also ignited discussion about who should play the new F4, said NetEase website. Kris Wu, a former member of Chinese-South Korean pop group EXO, was one of the names that came up.

Back in the 2000s, Yan, Chou, Chu and Van Ness Wu had been handpicked by Chai to play F4, a gang of four elite guys at a prestigious school in Meteor Garden. The show was such a phenomenal hit that the four also recorded albums and went on concert tours as F4 the boyband.

As for the new cast, Chai told Apple Daily: "We may use new people, idols or serious actors. Everyone is welcome to offer candidates."

Asked if Yan and gang will have cameos, she answered: "We'll see. We're still at the screenwriting stage."

New Chinese screenwriters are working on the new adaptation with Taiwanese Sharon Mao, who wrote the old one, Chai said. The shoot is expected to start in the second half of the year. According to a teaser poster, the reboot will premiere in 2018.

Meteor Garden was the first of many Taiwanese idol dramas to dominate Asian TV in the 2000s. Its success was likely the inspiration for Japanese, South Korean and Chinese TV adaptations of Boys Over Flowers.

The reboot of Meteor Garden also heralds Chai's return to TV. In 2012, amid a decline in viewership, she said she would take a break from TV production to focus on movie production and artiste management.

In an interview with United Daily News, she spoke of why she is revisiting Meteor Garden after 16 years. "A friend got the Japanese copyright, and asked if I had any interest in making it," she said. "It's probably fate."