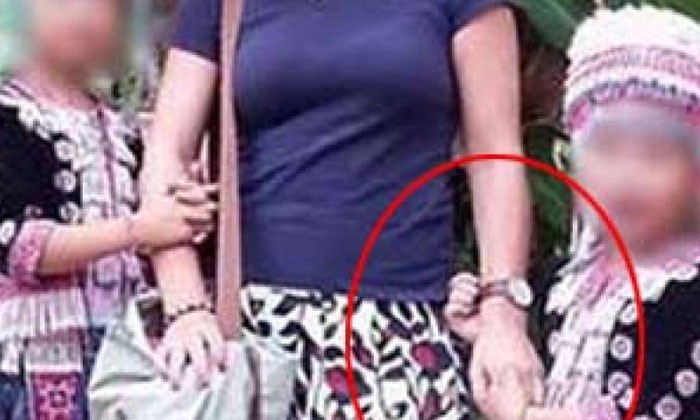 As a wide-eyed tourist, it is easy to fall prey to scams while on holiday.

For tourists, between deciphering maps, marvelling at the scenery, and struggling with the local currency, it is easy to let our guard down when in a foreign country.

Just ask one couple who was visiting a temple in Chiangmai, Thailand when their watch got stolen; the thieves were allegedly two adorable little girls who posed for a photo with them.

In a post uploaded to Reddit titled "Girlfriend in the progress of having her watch stolen", the man alleges that a photo he took provided incriminating evidence of the theft.

Taken outside the temple Wat Phra That Doi Suthep, the photo shows one of the girls in traditional tribal garb with her fingers seemingly in the midst of unclasping the watch from the woman's wrist.

The couple only noticed this detail when they reviewed the photos after the trip. 'This pic solved the mystery of the missing watch,' he wrote.

The story on Reddit received thousands of views and was picked up by news sites around the world.

But according to a latest report in Khaosod English, the girls and their parents have denied any wrongdoing after they were summoned by police investigating the case after the media attention it garnered.

The parents said in the report that they take their daughters, aged 7 and 10, to the tourist attraction every weekend "to make some money posing for photos with tourists for which they accept voluntary donations".

Khaosod English reported that the Redditor has since deleted his account, and noted that the man admitted that his girlfriend "was a bit drunk tbh".

Street crime perpetrated by children is not uncommon in many parts of the world, with the Telegraph Travel reporting in 2013 on the growing problem of pick-pockets in Paris, where "cash-carrying Chinese and Russian tourists at the Louvre were said to have been targeted by increasingly aggressive thieves, many of them children".

Travel blogger Yassine Laaroussi from Lifehack also wrote about the costliest scams one could encounter in Asia, with most of the scams listed occurring either in China or Thailand.

In China, beware of 'students' who badger you to visit their art exhibition, or friendly local women who ask to share a pot of tea at a local teahouse. You may find that an hour of charming conversation may cost you a pretty penny and leave you more than 700 RMB (S$143) out of pocket.

In Bangkok, besides being wary of tuk tuk drivers who offer 'cheap' rides, massage parlours and go-go bars are other hot spots where unethical practices thrive. A "60 baht beer could turn into a 2,000 baht bill", with burly men threatening your physical safety if you do not comply, wrote Laaroussi.

Laaroussi's best tip to avoid being the victim of a scam is one which we would endorse - simply decline the offer with a firm 'no' and walk away.