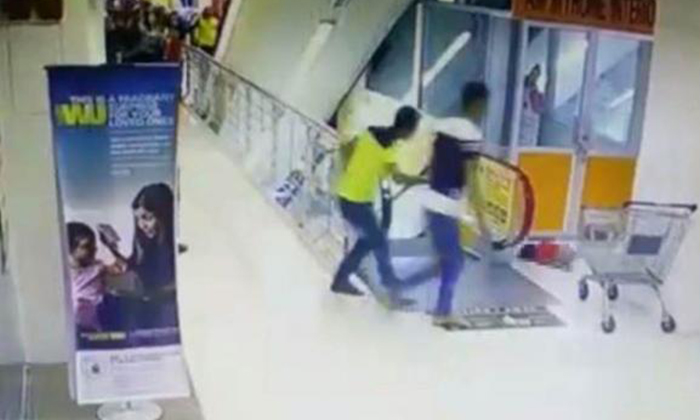 A toddler sustained serious injuries when she fell from an escalator at a shopping complex in Penang, Malaysia.

It is understood that the girl and her family were shopping at the mall.

Footage from the closed-circuit television (CCTV) showed the toddler sitting on her father’s shoulders as they got onto the escalator.

The father was carrying his daughter on his shoulders when they took the esca­lator to an upper floor, with the elder brother standing in front of them.

George Town Assistant Commissioner Mior Faridalathrash Wahid said preliminary investigations showed that the elder brother had fallen on the escalator, prompting the father to help him up to avoid danger.

He said, “In doing so, the father had bent forward and accidentally let go of his daughter, resulting in her falling down.

“The mother was unable to react in time as the incident happened quickly.”

The girl cracked her skull and sustained brain haemorrhage from the fall.

She is in critical condition and currently receiving treatment at the intensive care unit (ICU) of Penang Hospital.

Related Stories
Kid in China dies after dad accidentally falls on him while playing
'I want my daddy,' cries girl whose dad died attempting to save her at JB waterfall
Hysteria as child is dragged from pool in China after allegedly getting electrocuted
More About:
accident
toddler. kid
injured
Toddler falls from escalator
Malaysia
tragic