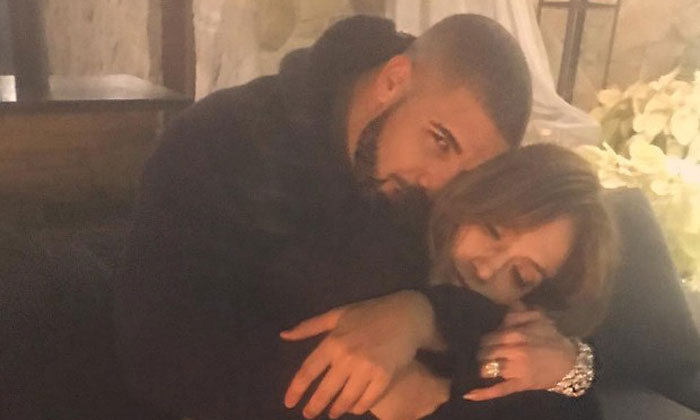 Jennifer Lopez has sparked rumours she is officially dating Drake with intimate social media post of the pair cosying up to one another.

The 47-year-old singer has got tongues wagging as she has shared a heart-warming picture of her and the 'One Dance' cosying up together, which was posted on her Instagram account on Wednesday (28.12.16), and the 30-year-old rapper has uploaded the same image of the 'Love Don't Cost a Thing' hitmaker sprawled across his lap, whilst he cradles her on his photo-sharing site.

Although the image is believed to be proof of their relationship, neither Jennifer or Drake have captioned the sweet photo of them both together.

And it is rumoured Rihanna - who ended her on-off romance with Drake in October this year - decided to unfollow the 'Shades of Blue' star on Instagram after learning Jennifer is dating her ex beau, which has left her feeling "very unhappy".

Speaking previously about the Barbadian beauty, a source said: "People in Rihanna's circle are saying she is very unhappy about the whole thing. Only a few months ago she and Drake were still together. Jen is one of her friends in the industry which made her all the more surprised."

However, Drake and Jennifer - who has six-year-old twins Max and Emme with her ex-husband Marc Anthony and recently split from her boyfriend Caspar Smart, 29, - have tried to keep their romance "under wraps" and pretend they are only work friends, although they are reportedly "smitten" with one another.

A source explained: "Jen and Drake have tried to keep their romance under wraps by suggesting they are just working together, but the truth is they are an item.

"They have been seeing each other for a number of weeks and her friends are saying she is already smitten.

"The age gap doesn't bother them.

"They have fun together and that's all that matters."

Related Stories
S'pore couples who have been married for over 50 years share the secret to a long and happy marriage
Why local DJs Glenn Ong and Jean Danker put off wedding for 5 years after getting engaged
Want to date Shigga Shay? Here's all you need to know about his love life -- and the kind of girls he likes
Jennifer Lopez
Drake
Hollywood
romance
dating
celeb couple
instagram
entertainment