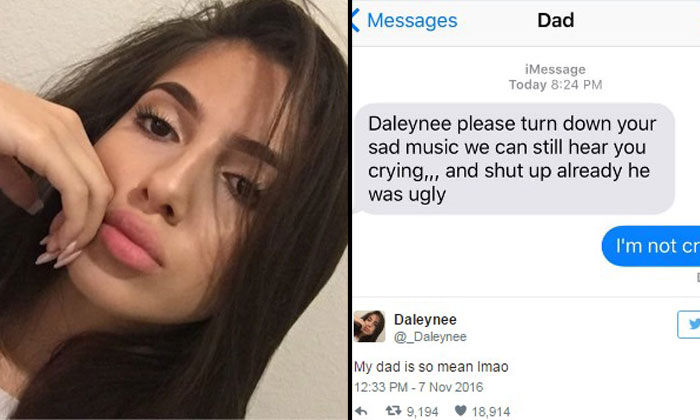 As the saying goes, "Dad knows best," and this episode by Distractify has perfectly illustrated how this applies to their daughters' love lives as well.

Teenage relationships are known to be the most unstable so heartbreaks are pretty normal, but check out how Daleynee's dad dealt with his high school junior daughter's unhappiness and anger towards a boy.

According to the site, Daleynee's dad is a super goofy guy who is always ready with a joke.

In an interview with BuzzFeed she said:

“We are always playing around. My mom gets mad at times because she thinks he can never be serious, but that’s something I love about him. There’s never a dull moment.”

Since her father is so young, he's constantly keeping up on all the latest trends the younger generation's getting into.

"He tries so hard to be hip, that’s probably the funniest thing about him. Also the worst because I can’t get away with much since he’s so updated on everything."

As Delaynee was busy ranting to her friend about the boy she had been having problems with, she received a text from her dad at the same time.

My dad is so mean lmao pic.twitter.com/yeSmYPVyz3

Delaynee insisted that she wasn't actually crying, and that it was just her dad's way of telling her to stop whining and complaining about the boy.

After she shared her dad's brutally hilarious text on Twitter, people started letting her know how awesome they thought her dad was.

"That's so cute. Dads are the best lol. cheer up Hun ur beautiful!"

What do you guys think of the way Delaynee's dad handled the situation?

Related Stories
Woman goes on Twitter begging people to stop glorifying 'crazy' girlfriends
The note that girl found attached to balloon on its way to 'heaven' will make you cry
Will you do this for your friend?
youths
funny
relationships
heartbreak
texting
text
viral
twitter
father
love