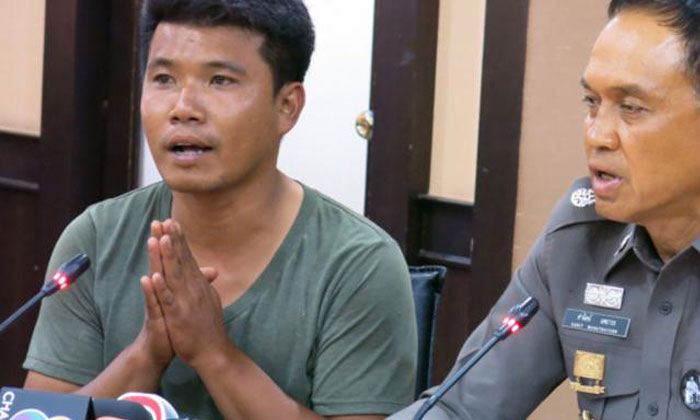 The 32-year-old motorcycle taxi driver who has been charged with raping an Australian woman in a parking lot in Taling Chan district last week has claimed he had consensual sex with the tourist, Metropolitan Police Commissioner Lt-General Sanit Mahathavorn said yesterday.

Following the one-hour interrogation of the suspect at the Metropolitan Police Bureau, Sanit told a press conference that police had spent days on the investigation and reviewed all related information to prevent criticism that they had sought a scapegoat in the case.

Police said they were confident the suspect was motorcycle taxi driver Ekburut Ritrakkhapan, which led to an arrest warrant.

Sanit said people Ekburut had been staying with arranged for him to surrender in Sakhon Nakhon's Sawang Dindaen district after they realised he was wanted by police.

Admitting he was the person named in the arrest warrant, Ekburut confessed to having sex with the tourist but maintained it was consensual, Sanit said.

During the interrogation, he claimed the Australian woman had a fight with another person in a pick-up truck. When he went to help, she climbed onto his motorcycle.

He claimed they were both drunk and later had consensual sex in an abandoned building because he had no money to pay for a room. He also denied stealing valuables from the woman. He claimed he left the woman alone at the building after she turned down his offer to give her a lift.

The 23-year-old woman, who is due to return to Australia next week, has told police she flagged a tuk-tuk for a ride back to her lodgings after drinking heavily but was taken to a secluded spot in front of a deserted building and attacked by the driver and his friend.

Related Stories
Police reject Australian tourist's tuk-tuk rape claim in Bangkok
US mother solicited men online to rape her 10-year-old daughter who was stabbed, strangled and dismembered
Youths get 18-year-old girl drunk -- then gang rape her in hotel room and take wefie with her when she was topless
Thailand
tourist
sex
crime
australia
illegal
cabby
police