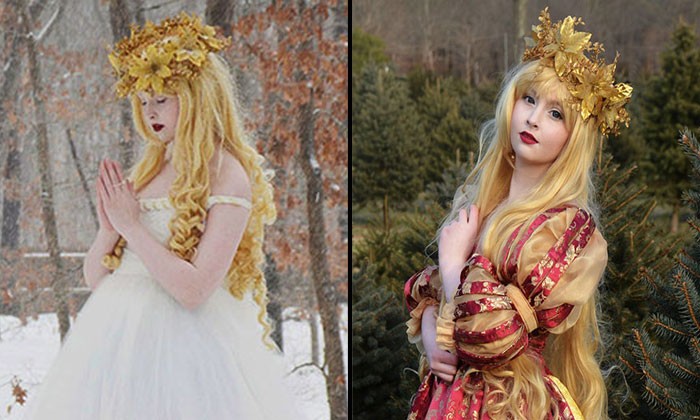 Every little girl has drawn her own fairytale dress, but 18-year-old Angela Clayton takes it to a whole new level - she designs them.

Angela started sewing when she was 14.

According to shareably, she was into cosplay, but she could not afford to buy any of the costumes, most coming from online retailers.

So she turned to designing and making them by herself.

Although the actual dress-making did not turn out to be as easy as she thought it would be, she says that she "really enjoyed it".

She also continued making the costumes because she enjoyed the actual sewing, and she loved "bringing ideas to life".

Many of her costumes are historically themed and elaborate, including sweeping trains and elaborate headgear.

She has recreated the looks of a few Disney princesses such as regal Elsa from the celebrated Disney film Frozen, classy Cinderella, and gutsy Merida from another Disney film, Brave.

Many of them are exquisite works of art, and it does not just end there. She completes the look with makeup, wigs, props, and even finds the perfect background to capture her work in photographs, making each one seem as if it is real.

She says that "If you practice, you can definitely do it." Anyone interested in trying their hand at this now?

Related Stories
Think this is a castle? It's a dorm room for 2 female students
Student invents acrylic nails to tap in and out of London buses and trains
Mrs Lee spotted carrying dinosaur purse in USA visit: It was designed by Pathlight student
design
dresses
fairytale
talent