Student gets repeatedly kicked and bashed by smaller kids 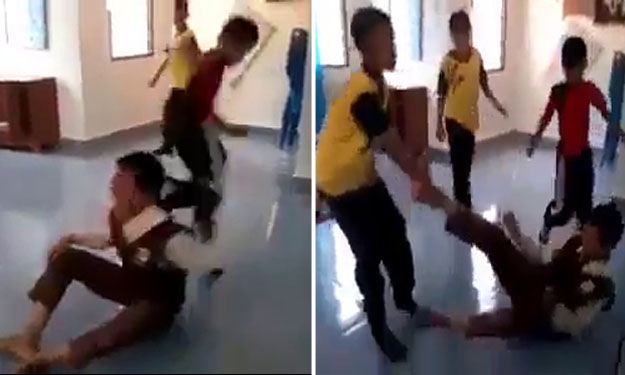 Another video of a school student being bullied and humiliated has gone viral on social media.

It is unclear where this incident took place.

The clip, which was posted on the Friends of Barisan Nasional Facebook page on Nov 15, has garnered over 1,000 comments condemning the act.

According to The Star, the incident is understood to have taken place in the prayer room of the school.

In the video, which lasts for over six minutes, a boy in a brown uniform was seen being brutally kicked and hit by many other boys.

Throughout the video, the bullies took turns to hit him.

The bullies, who seemed to be smaller than the victim, also sprayed him with water and wiped his mouth with a sock in addition to dragging him around by his leg.

The other boys were standing around and cheering, while not offering any help.

At one point, one of the bullies, held the victim’s hands while another kicked him in the stomach for a couple of times.

Towards the end of the video, the bullies can be seen hitting the victim with a small hammer and later climbing on him to kick him.

Anyone who has information about the incident are encouraged to report it to the police.

Take a look at the video below to find out more.