Starving sun bears in Indonesia zoo beg for food, eat their own faeces 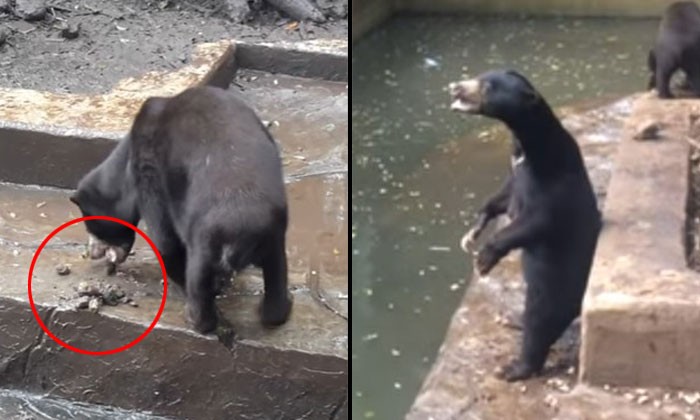 Distressing images and videos of skeletal sun bears begging for food from visitors in an Indonesian zoo has prompted calls for them to be rescued.

In one video posted on Jan 10, the bears are seen standing up on their hind legs inside their pen, and appearing to plead with visitors, who throw in bits of cake, sweets and crackers to feed them.

Another video, which was posted in May last year, shows the extent of the creatures' plight when one starving bear was filmed eating its own faeces.

The videos were posted on YouTube by the Scorpion Wildlife Trade Monitoring Group.

Scorpion's director, Gunung Gea, was quoted by Daily Mail Australia as saying: "When my team visited the zoo last week there was no grass or live trees on the floor of their cage. We saw a sun bear eating its own dung but when we contacted the zoo's officers they told us the bear was medicated and we weren't allowed to see it."

The group has started an online petition to pressure Bandung mayor Ridwan Kamil to close the zoo, which was also in the spotlight last year when images showed a Sumatran elephant that died with large sores on its body.

The petition has garnered over 2,200 signatures since.

Volunteers from the animal welfare group also said that the sun bears in the zoo were only a fraction of their healthy 80kg weight, The Straits Times reported.

Sun bears are the smallest of the world's eight bear species and are found throughout mainland Asia, Sumatra and Borneo.

According to National Geographic, their natural habitats are being threatened due to deforestation and poachers have also hunted them for their body parts and fur.

In 2015, a sun bear was beaten by workers at an oil palm plantation in Sarawak. The worker had reportedly been shocked by the creature's strange appearance.

It was subsequently reported that the bear, which had lost its fur due to a skin disease, was captured and taken to a wildlife centre in Sarawak to be nursed back to health. However, The Borneo Post reported that it later died of cancer.