S'poreans in Genting bus crash: Our Rolex watches, jewellery and cash were gone after rescue 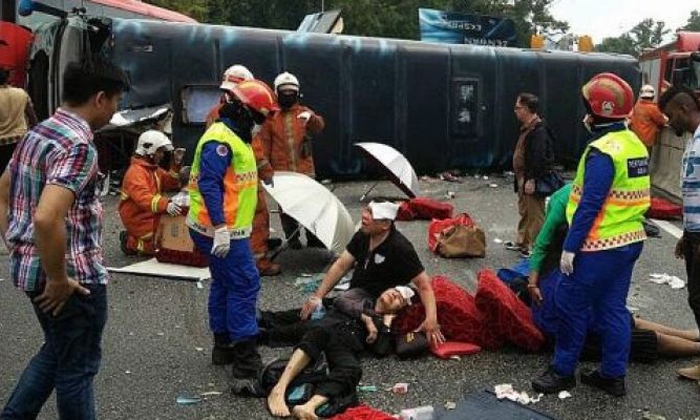 Blood flowed from his head as passers-by pulled him from the tour bus after it crashed and flipped on its side near Genting Highlands in Malaysia.

Mr William Wee, 52, was drifting in and out of consciousness, but all he thought about was his wife.

He was soon reunited with his wife, who was also pulled out of the bus. She, too, was badly injured.

As they lay on the ground near the wreck, Mr Wee realised that his wife was no longer wearing her jewellery.

Then he remembered that his Galaxy Note 5 and Sony Xperia smartphones, and his wife's Samsung, were still on the bus. But when he went back into the bus to look for them, they were missing.

"I don't know where everything had gone, but when my wife was dragged out, her gold necklace and bracelet were missing."

"We never found our luggage or phones," said Mr Wee, who later reported the loss to Malaysian police.

He had kept his and his wife's passports in his sling pack.

Mr Wee said he was confused after the crash, but noticed about a dozen people entering the bus to help pull injured passengers out of the wreck.

He also saw them standing around in the accident area, but they had vanished by the time the authorities arrived. He suspected that one or more of the bystanders could have stolen his valuables.

Mr Wee received 18 stitches to his head at Bentong Hospital. His wife had multiple fractures to her shoulder, ribs and right wrist.

They were later transferred to the National University Hospital (NUH) in Singapore. He is expected to be discharged today.

The couple were on the Grassland Express And Tours bus that crashed into a road divider at the Karak Highway last Wednesday at about 3.45pm while heading to Kuala Lumpur from Genting Highland.

Nine Singaporeans on board were injured. One of them, Mr Lim Sia Thian, 62, died from his injuries on Sunday.

Another couple on the bus have also reported the loss of their valuables to Malaysian police.

Mr Phillip Wee, 65, who is semi-retired, said in the report that his wife, who was injured in the accident, had lost her $6,500 Rolex watch as she was being pulled out.

They also couldn't find their luggage, which included their shopping of handbags, shoes, clothing and mooncakes worth a total of $1,400, and a carry-on bag containing a $1,000 iPad Air 3 and RM1,000 in cash.

"All we got back from the police were our passports," he told TNP yesterday.

"When I asked them where the rest of our belongings were, they said they did not know."

He said in the report that many people had entered the bus after the accident and while they seemed to be there to help, he believed they had stolen from the victims.

He said a representative of Grassland has contacted him and his wife to discuss compensation for their missing belongings.

Recalling the accident, Mr William Wee said the road was clear at the time of the accident, and he was not sure what caused the bus to crash.

"There was no car in front of the bus when it swerved suddenly," he said.

"When I saw that it was going to hit the divider, I shouted. Then my head hit something and I blacked out."

When he came to a few minutes later, he was being dragged out of the bus by strangers.

"I heard people shouting 'tarik, tarik' (Malay for pull), and someone pulled me out of the bus and left me on the road," he said.

"I sat up, and my head was bleeding like a tap, but I knew I had to find my wife."

His wife was later taken out of the bus by the passers-by.

Mr Wee said he was seated at the front of the top deck next to the late Mr Lim. He did not know Mr Lim, but was sad to learn of his death.

"It's really sad that this has happened," he said.

"Like most of the passengers, Mr Lim was sleeping when the accident happened."

Malaysian police said a blood sample had been taken from the bus driver and sent to be tested for drugs and alcohol.

Inspector Mohd Shaifuddin, the investigating officer, told TNP yesterday that the results have not been released. He added that no one has been arrested and that investigations are still ongoing.

Despite the loss of their belongings, the couples were grateful to be alive.

"Money can be earned. We may have lost all our belongings, but we are lucky that we at least get to keep our lives."

Related Stories
16 Singaporeans injured in Hokkaido bus accident
Singaporean family of 3 hurt in 5-vehicle accident along Malaysia's North-South Expressway
Woman run over by own car in Malaysia after she tried to stop it from rolling backwards
More About:
accident
Malaysia
injured
death