S'pore tourists who rescued Iceland woman trapped in car: 'We are not heroes' 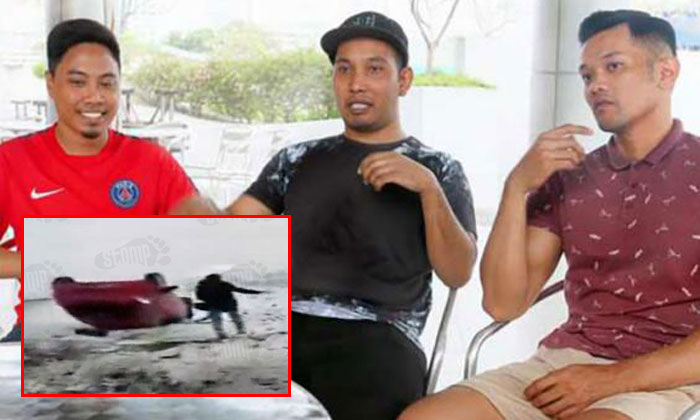 Most people who land a dramatic video that goes viral online will want bragging rights.

They even dismissed online talk that they were heroes for rescuing a woman in Iceland who was trapped in her overturned car.

While driving to Gulfoss Waterfall on Nov 15, they noticed a car, driven by Icelander Audur Gisladottir, hit a road divider.

The car then flipped over several times before landing on its roof at the side of an icy road.

Shortly after the incident, Mr Syahidin posted online a video of the rescue - taken by his friend Muhammad Nasir, 27.

It went viral on the Internet.

Speaking to The Sunday Times, Mr Syahidin said he had wanted to warn his friends, who were planning to visit Iceland, how dangerous the roads can be.

So he was surprised when netizens hailed the four men as "heroes".

"We never wanted the video to go viral," said the IT support analyst.

"We just happened to be there and as human beings, it's natural to help them. We are not heroes."

Mr Salihin Iddeeros, 27, who works as a train driver, said that the whole incident lasted about 30 minutes.

Upon seeing the overturned car, the group's first instinct was to rush over to get the woman out.

Mr Salihin quickly tried to unlock a car door because they could smell petrol.

After several tries, he managed to open a rear passenger door to unbuckle Miss Gisladottir's seat belt. She was alone.

By then, several locals had arrived at the scene and she was later taken away in an ambulance.

"We didn't manage to speak to her the whole time. She was screaming and very traumatised," said Mr Syahidin.

"But as long as she's fine, it's okay with us. There's no need for us to get any credit."

A friend also sent the clip to citizen journalism website Stomp, and it was uploaded on YouTube, where the video got more than 29,000 views.

An Icelandic website, Stundin, picked up the video and interviewed Miss Gisladottir, who expressed her gratitude.

The men said that during the trip, they experienced what it is like to drive on icy roads with temperatures at sub-zero while in the middle of snowstorms.

If anything, the entire episode has reminded them to be careful when driving.

"After witnessing the accident, we made sure we drove way below the speed limit of 85kmh for the rest of our trip," said Mr Nasir, a technician.

"This incident just gives us another story to tell."

Related Stories
Singaporean guys go to the rescue when car topples over in Iceland
Watch chilling SCDF rescue of elderly man who fell out of window of Tampines Block 410
My dad, the hero: Off-duty fireman comes to the rescue of child locked in lorry at Woodlands Blk 302A
inspiring
rescue
singaporeans rescue iceland woman
accident