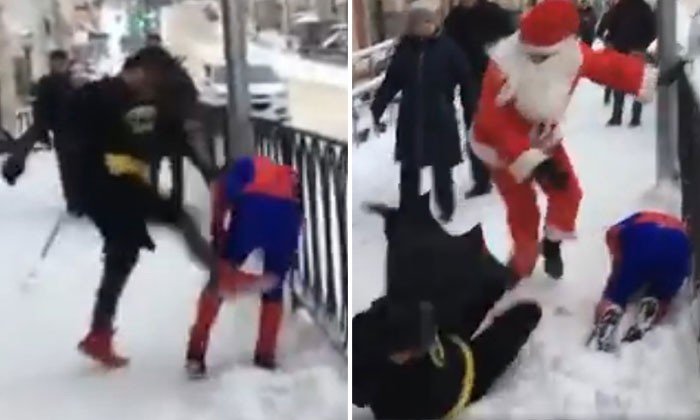 Move over Floyd Mayweather and Manny Pacquiao, a new fight card has now emerged that might dethrone your famous bout as the new 'fight of the century'.

A video circulating on Facebook shows Spiderman, Batman and -- believe it or not -- Santa Claus, involved in a Royal Rumble of sorts at a snow-covered pavement believed to be in Russia.

In the video posted on Savage Life XL, a dude dressed in a Spiderman costume can be seen getting pummelled by another clad in a Batman suit.

'Peter Parker' fell to the ground after a hard right hand to the face by 'Bruce Wayne'. The Dark Knight then proceeded to kick his opponent before raining a series of punches on him.

Just before Spidey was down and out however, an unlikely pal in the form of Santa Claus intervened.

He made sure Christmas won't be merry for Batman by kicking him and causing him to fall. Instead of presents, Santa then gave the Bat a taste of his own medicine by delivering punches of his own.

Realising that he was not a match for Santa, Batman scooted off, possibly to look for Alfred to treat his injuries and ego.

Father Christmas then went check on poor Spiderman, who looked to be a little shaken.

Have a look at the 'fight of the century' in the video below.