So not bomb: Facebook alerted netizens to fake explosion in Bangkok and refuses to apologise 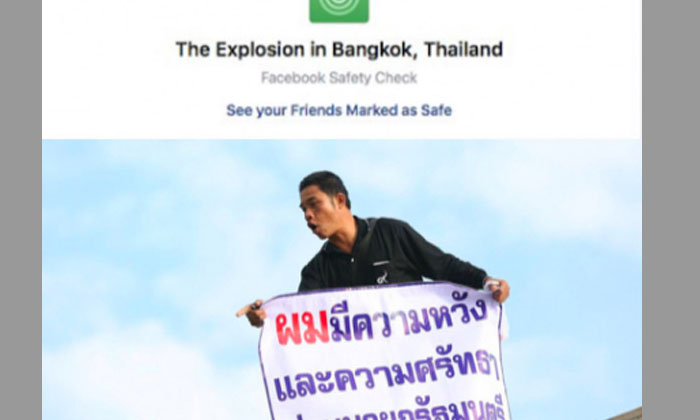 Social network giant Facebook stated yesterday that an alert about a bombing in Bangkok on Tuesday night - an attack that did not occur - resulted due to third-party news sources following an incident at Government House in the morning.

Facebook has not admitted a mistake or that the alert was made in error, but it turned off its Safety Check feature after it became clear that the bomb alert was inaccurate.

The check-in feature allows users to signal to friends that they are safe after a life-threatening event in their area, such as a terror attack or natural disaster.

On Tuesday night, many hours after the incident at Government House, the crisis notification tool created an alert called "The Explosion in Bangkok", which stated that a blast in the capital had been confirmed by "multiple sources".

In the genuine incident in the morning, a protester climbed on to the rooftop of a post office inside the Government House compound and threw five non-lethal, "ping-pong" firecracker bombs to draw the attention of authorities.

In its statement issued yesterday, Facebook said the alert was activated on the basis of confirmation by third-party sources, citing several English-language news outlets based in Thailand.

"As with all Safety Check activations, Facebook relies on a trusted third party to first confirm the incident and then on the community to use the tool and share with friends and family," the statement said.

The social-media network's alarm caused many people to confirm their safety before Facebook realised the error and deactivated the feature.

"The Safety Check for this crisis has been turned off," Facebook wrote on its Safety Check page regarding the false bomb alert in Bangkok.

The incident caused speculation in the Thai-language online community that there had been a false alarm but Facebook did not specifically refer to a "false" alert in its statement.

Facebook first launched its crisis notification tool in October 2014. The first time the tool was activated for an event other than a natural disaster was during the Paris terrorist attacks in November 2015.

Last month, the social-media company announced that Safety Check would be activated by the community instead of by Facebook so that more people could use the tool when they felt they needed it. This allows Safety Check to be used by more people regardless of the nature or severity of the incident.

"With every activation, we are continuing to learn how to make Safety Check better for communities in need and continue listening to feedback to make the tool more useful and relevant in future," Facebook said.Meanwhile, police are attempting to determine whether the false bomb alert was caused by an innocent error in Facebook's notification system or an intentional act by an individual, Royal Thai Police deputy spokesman Pol Colonel Krissana Pattanacharoen said yesterday.

He said causing public panic was a violation under the Computer Crime Act and offenders risked a maximum jail term of five years or a fine of up to Bt500,000 (S$20,000).