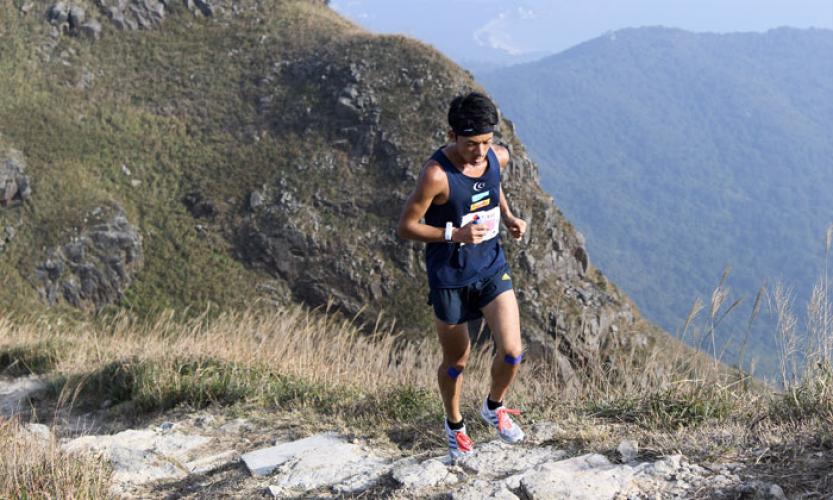 The MSIG Lantau Vertical Kilometre (VK), the first of four events of the Asian Skyrunning Championships, kicked off yesterday (Dec 2) at 3pm.

Set on the picturesque island of Lantau in south-west Hong Kong, the race saw 86 elite runners from 21 countries putting their technique and endurance to the test.

Participants were required to complete a 5km-long course laden with off-road trails and rocky terrain.

5km may not seem like a daunting distance for experienced runners, but do not let that distance fool you. The biggest test in this race comes in the form of height. As the name 'vertical kilometre' suggests, participants found themselves running upwards for most part of the race.

If the course could be characterised with one word, it would be steps. Steps were the unique feature that made the MSIG Lantau VK stand out among other trail-running events around the world.

This view was shared by endurance ultrarunners Cody Lind from America and Dong Li from China, who both said that threading through paths filled with steps gave the race an extra element of difficulty. Runners had to overcome man-made staircases as well as steps that came in the form of uneven cut-rocks embedded in the trail.

Running in that sort of unfriendly terrain was definitely anything but easy, as I found out.

On the way to a checkpoint at the halfway mark of the course, I had to traverse a 1km long dirt path.

Stones sticking out of the trail were my biggest enemy. I had to watch where I was going to make sure my feet had a comfortable landing. One a couple of occasions, my ankle bent precariously close to injury while I was negotiating the uneven terrain.

Then came the steps. I had no trouble with the first 100 or so steps, but as I continued climbing, the strain on my 27-year-old knees reminded me of a rusty door hinge that was going to give way anytime.

As I got higher, the air also started to get thinner. I had to take short breaks to catch my breath and shake off the lightheadedness unkindly provided by the altitude.

Now imagine if you had to run, not walk, on such a trail. Such was the difficulty of the MSIG Lantau VK.

The elite runners who had to run five times the distance that I walked however clearly proved that they were more than prepared for whatever stood in their way.

Not so slowly but surely the participants conquered the seemingly endless amount of steps and the hostile terrain and triumphantly made it past the finish line on Lantau Peak.

Their god-like speed and endurance can be summed up in what a race martial said when I asked him how someone train for a race like that:

Japanese runner Miyahara Toru was the first male participant to complete the race with a time of 38min 17sec. Fellow female compatriot Yoshizumi Yuri was the first woman to run past the finish line clocking a time of 45min 59sec.

The latter broke the course record of 48min 32sec set by Nepal’s Mira Rai in 2014. She shared her thoughts about the race and at the same time paid homage to her toughest 'opponent'.

"It’s my first time in Hong Kong and I enjoyed the race a lot. With the great number of steps, this course is challenging and demands extreme physical fitness."

Half the runners of the MISG Lantau VK will now look forward to their tougher events at the Asian Skyrunning Championships set to take place on Lantau Island once again tomorrow (Dec 4).

Click here to see the full results of the MSIG Lantau VK and see snippets of the race in the video below.