Singaporeans stuck in Hokkaido airport since Thursday due to snow 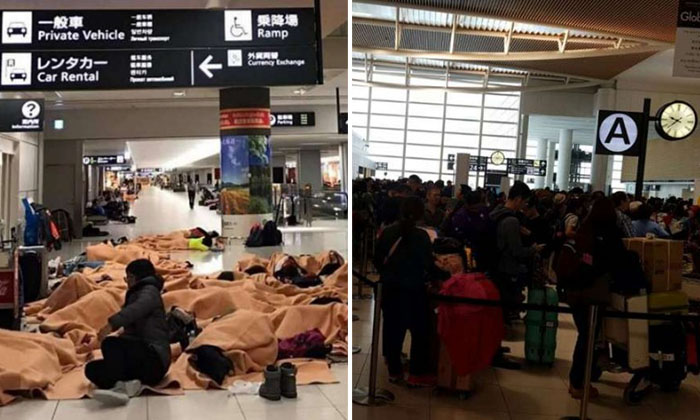 For the second time this December, Singaporean passengers are stranded in Hokkaido after heavy snow caused more than 250 flight delays and cancellations there.

The passengers boarded the Scoot flight at about 4pm, but the plane was delayed for another two to three hours because the right engine could not be started. They took off at around 7pm.

At least one Singaporean on Eva Airways' BR115, which was cancelled on Friday, was also affected.

Ms Angelina Hing and her family have spent two nights on the floor of New Chitose Airport in Sapporo since Thursday, she told The Straits Times.

The 46-year-old lawyer estimates that a few hundred people were stranded at the airport.

As the hotels near the airport were full, many people were sleeping on the floor of the airport. They had to queue for more than two hours just to get blankets, she said.

Scoot provided meal vouchers, but they were of limited use, she added.

They were "only applicable to a handful of eateries, and on Thursday night by the time we checked out all eateries had closed". The eateries and convenience stores also ran out of food as more and more people arrived at the airport .

They have checked in and checked out three times since Thursday, she said.

On Friday, it took them more than three hours to check in, only to check out when flights were cancelled again.

She said that Scoot staff were polite but "displayed very little flexibility", and there was a "lack of communication" which added to their frustration.

But they were hopeful that they would be able to fly out soon as the weather appears to have cleared.

"With sunny skies today everyone is dying to get out of Chitose," she said.

Scoot said in a statement that flight TZ216 bound for Sapporo was diverted to Tokyo on Thursday as the runway at New Chitose Airport was closed. The flight only landed at around 10.50am on 23 Dec.

"Consequently, Scoot flight TZ215, originally scheduled to depart Sapporo for Singapore via Taipei at 5.25pm on 22 December, was delayed as well," it said.

"However, the aircraft was not able to depart on 23 Dec due to adverse weather, which led to the closure of the airport in early afternoon."

A total of 284 flights were cancelled ton Friday, with about 6,000 people spending the night at the airport, national broadcaster NHK reported.

As there were no hotel rooms available, the more than 300 affected guests were issued meal vouchers.

Singaporean dentist Tan Keng Wee, 28, who is travelling with seven friends on China Eastern airline, said that they waited in the plane for seven hours on Friday before being asked to disembark.

The airline also has no ground staff at New Chitose, he said.

"It's been pretty terrible...  The convenience stores were emptied out completely by the time we got out and we had to find space on the floor to sleep on," he said. "People were hoarding power points; blankets were being given out but the queue was longer than the one we have in Singapore for baked cheese tarts because every single flight was cancelled."

Facebook user Eric Cheong told The Straits Times that Eva Airway's BR115 was scheduled to leave New Chitose Airport in Sapporo at 3.20pm on Friday (Dec 23). It was also cancelled due to heavy snow.

He said they were inconvenienced as the cancellation was announced late at night.

He and his companions had to sleep over in the airport as the cancellation was only announced at 8pm when all the restaurants were closed and they were not able to find hotel accommodation anymore, Mr Cheong said in a Facebook message to ST.

He will have to spend Christmas eve at the airport as the flight to Taipei has been re-scheduled to Sunday afternoon.

He is among more than 700 passengers of Eva Airways affected, according to Taiwan reports.

It added that all hotels near the airport have been booked, and China Airlines could only provide its passengers with sleeping bags and blankets and have them rest at the airport's departure hall.

Nearly 200 Singapore Airlines passengers were stuck in northern Japan about two weeks ago after more than 250 flights were cancelled due to inclement weather.