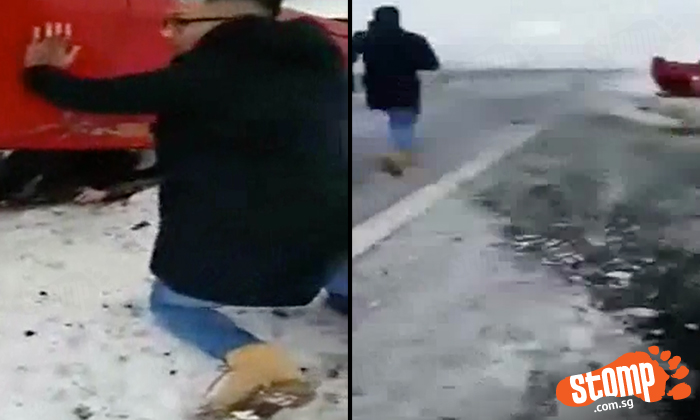 The incident appeared to have happened in Iceland, as the title of the video suggests.

The men in the video, who spoke in Malay, also seem to be from Singapore.

In the video, a man is seen running to an overturned red car, while an woman’s wailing can be heard in the background.

A male voice can be heard saying: "Get your seat belts!"

The man and another companion then tried opening the door of the vehicle to pull the victims out, telling the one of the victims to unbuckle her seat belt.

During the rescue attempt, the men communicated in Malay, as several more passers-by approached the scene.

According to moldymoldy, the video was taken by his friend.

Said the Stomper: "The accident could have happened due to an unchanged tyre that caused the car to skid on the snow."

Moldymoldy also claims that the rescuer and his companions are Singaporeans, and that the incident happened on Tuesday (Nov 15).

Watch the breathtaking rescue attempt below.