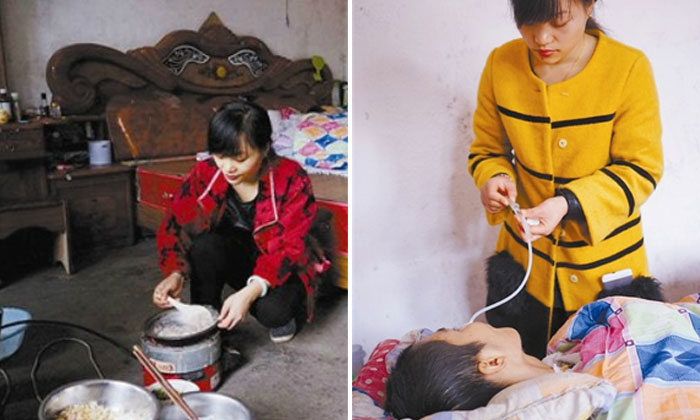 The following tragic but heartwarming story of a 27-year-old woman from Guangxi, China, who began to devote herlife to patiently looking after her paralyzed fiance -- has recently gone viral all over the Chinese web.

Liao Mingpei first met her fiancé, Jiang Pengfei, back in 2009 when she was working in Guangxi's Baise city, reported Tencent News via Shanghaiist.

And much like any other love story -- the two fell in love. Now here's where things started to spiral downwards. the two of them had wanted to get married but Jiang's age for some reason was registered as three years younger than his real age. And this posed a problem because according to China's Marriage Law, men had to be at least 22-years-old to get married, while women had to be 20. Due to this complication, the two ended up not getting married, and their daughter was born out of wedlock.

And as if this was not bad enough, a bigger misfortune stuck the family in August last year.

Jiang damaged his skull when piece of metal fell onto his head at work. Ouch.

Not only was he badly injured, but he also became paralysed.

His medical bills exhausted the family's savings, putting them 120,000 yuan into debt.

But of course, this did not change Liao's devotion to her loved one.

Instead, she patiently looked after Jiang every single day from then on.

From drinking water, to his daily injections, to even the littlest things like helping him get things out of his throat by turning him to one side and patting his back -- everything.

On top of that, Liao and Jiang's mother made it a point to hike up to the mountains to collect herbs for Jiang's herb bath.

Liao also often dreams of the day Jiang wakes up, for the both of them to hold their daughter's tiny hands and shoot a series of wedding photos.

When asked what makes her so dedicated to her paralyzed fiancé, Liao responds with a smile, "A day together as 'one' means endless devotion for the rest of your life."

And thousands of netizens took to online forums to express their respect for Liao:

"If I get a wife like her, I can die without regrets. After he recovers, he needs to cherish her."

"We should believe in true love. If you yourself don't believe in it, you don't deserve love! I hope he regains consciousness soon," said another. "Jia you!"