Sad-looking kitty is about to be put down, but gets adopted instead and starts smiling instantly 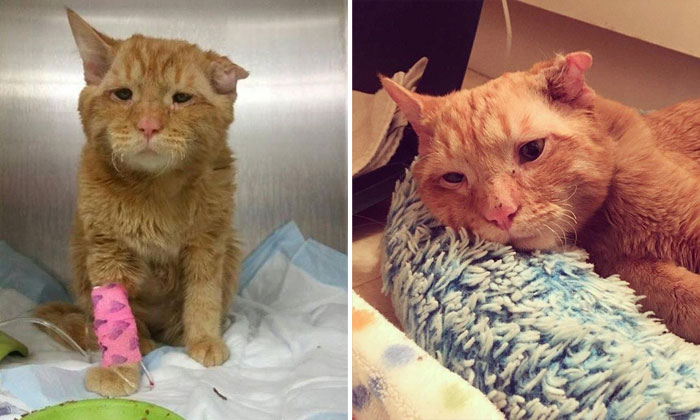 His face is permanently in a sad expression because of a condition where his face has an excess amount of skin. To add to his pitiful appearance, he has a crushed spine, multiple deep cuts, and a cauliflower ear, presumably due to an attack by a big animal in the wild.

The poor tom was adopted before, but was returned because of his medical needs.

According to the source Love Meow, "At that point he was deemed 'un-adoptable'. The vets said he'd never walk and he'd be on pain meds for the rest of his life."

He was scheduled to be put down.

Thankfully, a kind woman who worked at an ER vet clinic and her boyfriend decided to save him: just in the nick of time.

She said "We managed to get everything sorted out the day before his scheduled euthanisation and brought him to his forever home."

At the shelter, BenBen had appeared to lose hope, refusing to eat, drink or even move. As soon as he was brought home, however, he instantly changed, purring, smiling and cuddling up to his new owners.

As for the vets who said he would never walk again, BenBen defied their prediction: he can walk, run, and even jump short distances.

He even looks a lot happier - even if his sad face is permanent.