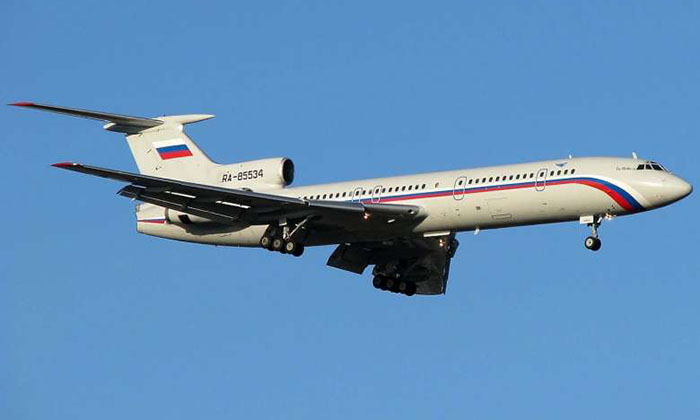 A Russian military plane carrying 92 people, including many singers of the famed Red Army choir, crashed into the Black Sea en route to Syria on Sunday (Dec 25), prompting President Vladimir Putin to order a probe and declare a national day of mourning on Monday.

Major-General Igor Konashenkov, a defence ministry spokesman, told reporters that nobody had survived.

“The area of the crash site has been established. No survivors have been spotted,” he said according to Reuters.

The Tupolev Tu-154 plane with eight crew and 84 passengers, including 64 members of the army's famed Alexandrov Ensemble as well as a prominent Russian humanitarian activist, had disappeared from radar at 5:25 am, just minutes after take-off from Sochi Adler airport.

The soldiers were heading to Syria to participate in New Year celebrations at the Hmeymim base.

Putin, in televised comments, ordered a national day of mourning on Dec 26. He also ordered the government to probe the crash, the Kremlin said.

“Russian President Vladimir Putin has ordered Prime Minister Dmitry Medvedev to form and head a state commission to investigative the crash of the Tu-154 plane in Sochi,” the Kremlin said in a statement, adding that Putin expressed his deepest condolences to the families and friends of the victims of the crash.

Medvedev said in a separate statement the passengers were "flying to Syria with a kind and peaceful mission" and the crash “will be carefully investigated".

Moscow has been flying a bombing campaign in Syria since September 2015 in support of long-time ally Bashar al-Assad.

According to the manifest released by the defence ministry, those on board the doomed plane were eight crew members, eight military troops, nine journalists, 64 Alexandrov Ensemble members, two civilian officials, and Mrs Elizaveta Glinka, a prominent Russian humanitarian and charity activist.

She was travelling to Latakia, where the Hmeymim base is located, to deliver medical supplies to a hospital.

Ananyev did not join the trip as he had to stay home for the birth of his third child, the report added.

Sources on the ground earlier told RIA Novosti that technical failure and/or human error were being considered as potential causes of the accident.

TASS reports that weather conditions in Sochi are “favourable” to aviation. No civilian flights have been cancelled.

The crash happened while the plane was ascending, and the crew didn't signal anything was wrong, a source told Interfax earlier.

In April 2010, a Tu-154 serving as the Polish presidential plane crashed in thick fog in western Russia, killing Poland’s President Lech Kaczynski and 95 others, including many top civilian and military officials.

At that time there had been 66 crashes involving Tu-154s in the past four decades, including six in the past five years, according to the Aviation Safety Network.

In September 2010, A Russian passenger plane carrying 81 people made a “miracle” crash landing at a deserted air strip after all its systems failed in mid-flight.