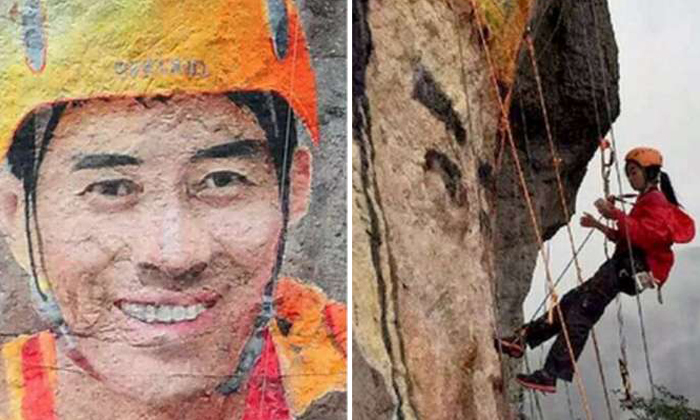 A woman's antics to draw the attention of a man she has a crush on have inspired debate on social media, reported the BBC.

She has painted a huge portrait of the man of her dreams on the side of a cliff.

The female rock climber, who is in her 30s, identified herself only as "Lingling", a generic local name for a woman.

According to Chinese radio station FM93, her mural at Xianju National Park in Zhejiang province in Eastern China took her several weekends over a two- month period to complete.

She would start painting at 3am and go on for several hours, reported the BBC.

Lingling would identify the man only as "33Liuyun".

The 7m-tall portrait first came to notice when a fellow rock climber shared a photo of it on social media. The image soon became viral and the subject of heated debate, as some felt that Lingling should be prosecuted for vandalism.

According to the BBC, it look the authorities days to locate the specific rock where the image was painted. It was eventually found 200m above ground on Fanzheng Rock.

Sadly, Lingling has been left hanging by the object of her affections.

"I have strong feelings for him but he hasn't responded to my affection," she told the radio station FM93.

"I asked him to take me to climb Fanzheng Rock but every weekend he was always busy either with mountain rescue or training."

She added that "33Liuyun" is a well-regarded rock climber in the local climbing community. She also picked Fanzheng Rock deliberately as he had allegedly climbed the rock with his bare hands in 2012.

"I want to keep my love on the top of the rock forever and worship him up there," she said.

This was not the only time she had drawn him in public. She added that she also drew an image of him on a toilet door. An image of that has also been located by cyber sleuths and shared on Chinese social media site Weibo.

Social media users have been divided on this one-sided romance.

Some have expressed their admiration for the persistence and artistic talent of Lingling.

Another user Jianpanxia suggested that the painting "might become an ancient monument a few hundred years later".

Others, like user hbchendl, also contended that it was not environmental vandalism: "This is a beautiful painting, not a random graffiti. Keep it. It is not only a picture but also a beautiful youth story-a distressed girl's heart."

However, various polls online on whether the painting should be removed have yielded different results, according to the BBC.

However, officials at the Xianju National Park are adamant that the drawing must go, reported the BBC.

A statement released by the park said: "In order to restore the original situation of the rock, we will follow ecological and geological experts' suggestions and make sure the natural resources and ecological systems are not damaged. We will ensure scientific and reasonable procedures are taken to complete the cleaning work."

Lingling seemed resigned to this decision. She said: "For me, it is a memento about him and if the local authorities ask me to clear it, I will do it quickly."

It remains to be seen however, if she is as resigned to her fate in love.

Related Stories
Woman finds ex-BF's 90 touching love letters only after breaking up -- but it's too late
Multimillionaire gives up all his assets, moves to rural village and marries simple farmer
Swept off her feet: Girl faints after boyfriend proposes to her
More About:
China
romantic
things we do for love
rocky romance
art
funny