Robbers make off with gems worth over $325k in KL 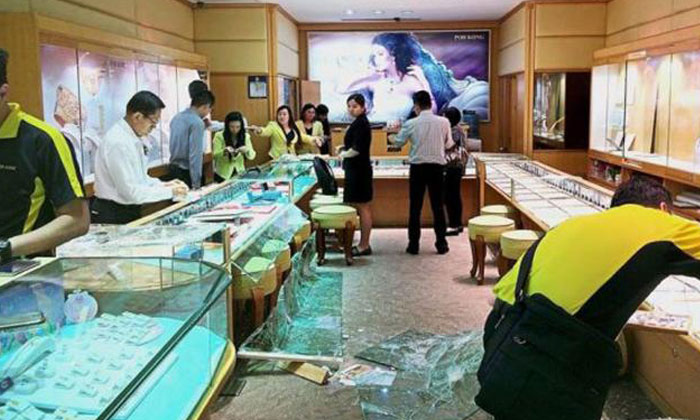 A gang of robbers hit a jewellery shop in Plaza OUG, Kuala Lumpur, while the shopping complex was crowded with customers during lunch at around12.50pm on Friday (Dec 9).

Customers were seen running all over the place to hide as the four masked men armed with a parang, hammer, and what was thought to be a gun, barged into the store.

The heist, believed to involve over RM1mil (S$325k) worth of jewellery, reported The Star.

After bagging the jewellery, the gang fled in a green Mercedes that was waiting for them outside.

"The Forensics Department currently has nine swabs of blood from the scene as well as two glass shards with traces of blood.

"These will be sent for analysis," said ACP Shahrul.

Five employees and an armed security guard were present in the store at the time of the robbery.

Unfortunately, the armed guard was not able to react in time -- before the robber aimed his weapon at the employees.

Though the incident lasted only several minutes, sourced said losses could reach over RM1mil.

"When I saw one of the robbers with a hammer, I quickly ran away. I was worried he had other weapons with him," said a shopkeeper nearby, who only wished to be called Siti.

The case is currently being investigated for armed robbery.