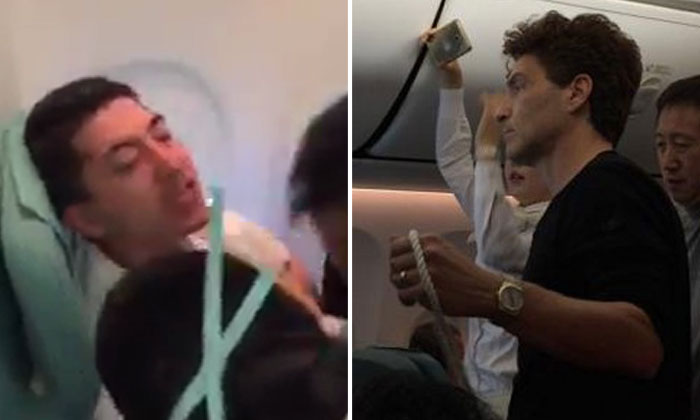 The 53-year-old hitmaker stepped in after observing that the flight crew were struggling to handle the situation.

"We have [the] video of entire chaotic and dangerous event on Korean Air 480. Lasted 4 hours. Crew completely ill-equipped to handle [the] situation."

His wife, Wendy Fuentes uploaded photos of the ordeal to her Facebook and wrote:

"I feel horrible for the abuse the staff had to endure, but no one was prepared for this. They never fully got control of him."

In a video circulating online, the cabin crew can be seen struggling to restrain the passenger with rope to his seat.

The whole time, he continued to shout at them and even spat and kicked at them while in his seat.

According to The Korea Herald via AsiaOne, the man has been identified as the son of Doojung Chairman Lim Bung-sun who manufactures makeup brushes supplied to cosmetic brands like Chanel, Giorgio Armani and Lancome.

The 34-year-old man identified by his surname Lim, had a few pegs of whiskey with his meal before the incident.

He was arrested when the plane arrived in Seoul but was sent home because he was too drunk to be interrogated.

Incheon International Airport Police plans to summon him this week to investigate whether he violated aviation safety laws and for other violence charges.

A Korean Air stewardess said that he has been blacklisted.